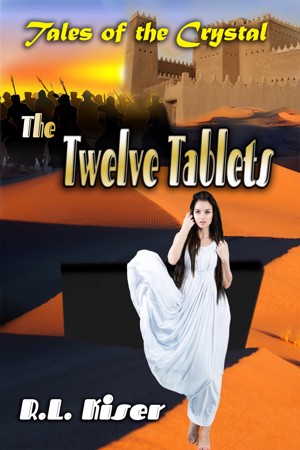 By R.L. Kiser
Rated 5.00/5 based on 1 reviews
In this fantasy of sorcerers, heroes, and villains amazing discoveries are made in the deep desert. An epic battle between good and evil will keep you glued to the pages. More
A thousand mile journey lies before Darian and his father. The young man makes good on his promise to return and discover the third obelisk buried in the deep desert and return to the temple of the Goddess Narine, as foretold by the prophecy.
Mahmud and he decipher the binary code from the obelisks' ancient writings. The reading of the Twelve Tablets brings forth the beautiful and shining Lady Mist. Under her guidance the 'Keeper of the Word' Darian unwittingly frees an ancient evil.
Lady Mist's purpose is to balance her energy with that of the Dark She. But first they must stop Sheik Achmed the Terrible’s new army forces from subjugating all the land of the desert.
Their resolve and combined magical talents must overcome tremendous odds.

Also in Series: Tales of the Crystal

I enjoyed The Twelve Tablets by R.L. Kiser.

The crystal warrior, Darian, returns to the deep desert with his father in tow when a strange disturbance in the world tells him it's time to resolve the mystery of the twelve tablets once and for all. They soon reach the Crossroads, a nearly permanent tent city in the deep desert, where Darian's friend Rashim reveals that not all is well. Instead of Rashim having become Shiek, his cousin Achmed the Terrible has taken that title for himself.

Worried that they'll be followed to the goddess Narine's elusive temple and its tempting riches, Darian and Rashim are in luck with Aweil of the Dance (Tarina the Crystal Warrior) and her constant companion Prince Abdul arrive and volunteer to provide a distraction, allowing Rashim, the scholarly Mahmud and of course Darian and his father Dorian to escape unnoticed.

Despite the harsh nature of the desert, the small group soon finds the third tablet, all that stands between them and access to the chamber of The Twelve Tablets. But when they finally reach the tablets, they are in for a surprise, for not only do they release the benevolent Lady Mist, but also her dark counterpart the Evil She (or Dark Witch).

From there the action takes off and both Crystal Warriors and their desert friends must fight to save the world from the escaped evil that threatens to engulf the entire world under its foul shadow.

What I most enjoy about this story is the ability of the author to draw one into the minds of his characters, even those who happen to be on the "wrong" side of the battle. Additionally, the banter is natural and entertaining, the characters are complex and dynamic, and the battles are epic and exciting. On that note, few authors are able to narrate a battle with such skill that they can keep me from skimming through them, but R.L. Kiser is one of them.