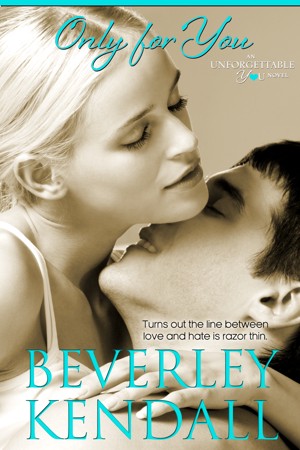 Only For You (Unforgettable You, Book 1)

Zach’s good looks may have always gotten him his pick of girls, but it's the star quarterback’s skill on the football field that gives him his pick of the Big Ten colleges. To escape the crushing demands of his win-at-all-costs father, Zach opts for a private university in upstate New York where...his present and past collide. And the one girl he’s always wanted but can’t have—and a class trip to Paris—turn out to be the ultimate game changer that has him breaking every one of his rules.

I have always loved books, romance and wished that everyone (most especially me) would find their happily ever after. Add in my love of London, England set in a period when ladies strived to be genteel and dresses could barely fit through doors, and it was obvious I could write nothing but historical romances.

As the mother of one too bright and mischievous young boy, I pull full-time duty on all fronts. When I'm not working at my techy-type job, mothering, writing or reading, I'm probably sleeping and dreaming of a time when I'll have time for my favorite hobbies: knitting, crocheting and sewing.

Also in Series: Unforgettable You

When in Paris by Beverley Kendall
Language of Love Series Book 1
Olivia Montgomery has left the past behind in Maryland as she moves on to college. At least that was what she thought until the past walks into her French class looking as handsome and sexy as always. He also gives her the same look as always, the one that says he can like anyone in the world….but her.

Zachary Pearson couldn’t believe out of all the schools Olivia is in the same one as his. He fought through four years of high school to ignore her. With her blonde hair and gorgeous body making an all around beautiful package, ignoring her wasn’t easy then….and even harder now. Like he needs more to deal with besides a dad plotting his career and a crazy ex who won’t accept that it’s over.

I really liked the way the author wrote each character as first person and it was always clear who was speaking, as if you were watching the story happen through their eyes. This couple have many ups and downs and their emotions come through loud and clear. There are also a couple side stories going on that will be part of the next three books; Those Nights in Montreal, April in Milan and Letting Go in London.
**Sexual Content and Language
**Received through NetGalley for review
http://justjudysjumbles.blogspot.com/2013/05/beverley-kendall-book-list.html

(reviewed the day of purchase)
candyconesa reviewed on Jan. 6, 2013

I have been an avid fan of Beverley Kendall's historical romances and although this book is a completely different genre it is an absolute winner! I loved every second of it and if it wasn't for the fact that I desperately needed sleep last night I would have read all through the night.

This book proves what a versatile story teller Beverley Kendall is. I am waiting with baited breath for the next book in the series!

You have subscribed to alerts for Beverley Kendall.

You have been added to Beverley Kendall's favorite list.

You can also sign-up to receive email notifications whenever Beverley Kendall releases a new book.