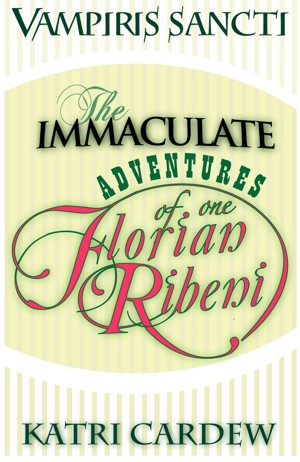 Vampiris Sancti: The Immaculate Adventures of One Florian Ribeni

Katri Cardew presents original realms with a writing style rich in description and full of diverse creatures’ where trepidation seems the norm.

The main character, Florian Ribeni moved on from humanity the moment he had accepted his life as a vampire, living a life of self-indulgence and seduction. After ending up on the roof of the building holding the Velave Ball he finds himself caught between vanity, bricks, Gargoyles, Raiders, Martyc & an Elf does his life he so loves turns upside down. Leading to a path as a Runner, an influential position with escapades like no other to protect against the danger that may lead to certain doom, if immortal worlds are relieved to the mortal ones.

The events that unfold within this book are not for the fainthearted and would entice anyone looking for a bloodthirsty retreat into a world full of mystical creatures & mere mortals.

The writer had developed realms and characters with depiction in such a way I was utterly engrossed from beginning to end making this one of my favorite reads. This is the perfect book for people who want to retreat into paranormal fantasy.

A fascinating journey through a perception of a world much unlike our own. A world with many races and types of characters such as intelligent vampires, mages, and demons are a part of what makes this book so intricate. The author's writing style manages to pull off adding many different elements into one great plot, it's very detailed and articulate and it's a major factor in why I respect the writer so much. Katri Cadew doesn't just write in a way that tells a story, she writes a style that is so visually rich that it shows you what she is trying to express. This book focuses on Florian, who becomes a vampire runner - part of a vampire militia, Florian finds himself defending a younger vampire who is trying to escape a succubi cult which leads him on an exhilarating adventure. We follow him on his journey throughout various escapades that have many twists and turns that I never would have expected. If you're into sophisticated books with a well-thought out background and characters, then this book is for you

"Vampiris Sancti: The Immaculate Adventures of One Florian Ribeni" is a vampire-focused novel that is unique among other entries in the current craze; instead of focusing on the relationship between vampires and humans, it focuses on the relationships between vampires and a host of other creatures. It's also unique in that its main character could very well be the ultimate Oscar Wilde of vampires--while characters like Anne Rice's Lestat indulge in hedonism, Florian Ribeni takes it to the next level. Before he becomes a Runner, helping enforce the laws of the vampire nation, his life both as a human and then as a vampire is totally devoted to fashion, sensation, and pleasure.

The novel starts with action, as Florian and his mentor chase Metis, a rogue vampire who is indulging in the forbidden "warmdri"--that is, the blood of a human who is not kept by vampires as a donor. Bringing modern-day problems into the vampire world, Florian's mentor is killed by a drunk driver during the pursuit, and Metis escapes to find sanctuary. Florian's true adventure then begins, as he and a host of other characters pursue Metis to bring their own brand of very violent justice to her.

"The Immaculate Adventures of One Florian Ribeni" presents a unique world where vampires, pixies, elves, and demons coexist, clash, and sometimes fall in love (or at least infatuation). Some of the most enjoyable scenes are between Florian and the playful elf Zyre, who delights in being wayward and causing mischief. The two have an unlikely yet charming relationship, and how they eventually come to peace with one another (well, a sort of peace) was fulfilling to me as a reader. I also very much enjoyed the flashbacks to Florian's youth, which detailed his journey to a life of pleasure and indulgence; as I mentioned above, they had a very decadent, Oscar Wilde feel.

While I was interested in the actual storyline and invested in Florian's pursuit of Metis, especially when he baits the truly terrifying Daughters of Leleht in a ploy to find the fleeing vampire, I often got tripped up by all the characters and the words the author has created for her novels. For instance, all the different vampire houses, their founders, and their Heralds grew confusing, and then when you added in all the different characters of different species I found myself reading over some passages multiple times to remember who was who and who had done what. There's a glossary at the back that helps a bit, but you don't always want to turn to the back to get a refresher on who someone is. I will say, however, that the revelation at the end of the book--the identity of Florian's true love--is shocking and satisfying, and gives the ending a definite impact.

For readers who like an epic read, with a host of unique characters and a new world that's richly developed, "The Immaculate Adventures of One Florian Ribeni" will be a good read. For those who are looking for something a little lighter and don't focus as much when they're reading, it might be a bit confusing.

What a journey this book is. I am used to reading about vampires running around in the world as we know it, but this book takes it up to a whole new level. The book is about Florian Ribeni, who has turned vampire, become a friend of elves and is a Runner. Runners are vampires that are busy protecting the Veil and corralling Rogue vampires. The Veil keeps us from seeing what is real. It is not about the world as we know it, but about the unseen world that is around us.

This book is well written, and the journey is very pleasurable and captivating. This is definitely not a book that you want to read to numb the brain and make time pass. The story and characters are complex and every unfolding.

Florian is a young man whose passion for a life of pleasure and desire takes him into the world of vampires. In this world, he is befriended by elves and pixies. One pixie named Beb who is an alcoholic gin swilling comic who proves what friendship is. The pixie Beb is definitely a good drunk.

In the book, Florian also deals with mages, demons, gargoyles and vampire killing orics while chasing Metis a vampire who has stepped outside what are vampire laws and is subject to be killed. To add to the twist and turns of this book you find out that Florian and Metis had a very unusual relationship before he became a Runner. There are so many questions that you can only answer with your imagination, which really makes this book enjoyable.

This is a draws you in and pulls you away from your world fiction at its best. The book is one of those cold, rainy days to curl up and read books. At the price, this kindle book is more than worth the money. The turned out to be one of the books that you need to add to the collection if you are a fan of vampires or alternate realities. It is well worth the time spent reading it.

This one was even worse than Cardew's others in the serial. The reason:The storyline is very inane and juvenile,sort of a Twilight2.0. If your a teenage girl, you might enjoy it, but for us grownups, this is a throwaway.