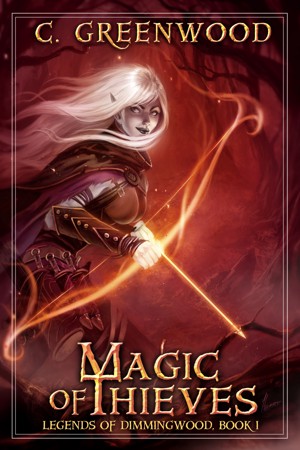 But as Ilan matures, learns the skills of survival, and struggles to master the inherent magic of her dying race, danger is always close behind. When old enemies reappear and new friendships lead to betrayal, will her discovery of an enchanted bow prove to be Ilan’s final salvation or her ultimate downfall?

When I was small, my mother taught me about the magickless—evil men who hunted our kind to destroy us. They came from across the water to steal the lands of our ancestors. Pretending to want peace, they enslaved us and sought to extinguish what they couldn’t possess, the one thing their harsh laws could never control. Our ancient powers. One day, my mother warned me, violence would shatter the safety of our home, and when that day came, we must fight. And we must win.
Download: epub mobi (Kindle) pdf more Online Reader
rtf lrf pdb txt
Price: Free! USD
Add to Library
Create Widget
Tags: sword and sorcery wizards epic fantasy magic free fantasy book dimmingwood dragons fantasy
About C. Greenwood

USA TODAY bestselling author C. Greenwood started writing stories shortly after learning her ABCs and hasn't put down her pen since. After falling in love with the fantasy genre more than a decade ago, she began writing sword and sorcery novels. The result was the birth of her best known works, the Legends of Dimmingwood series. In addition to her writing, Ms. Greenwood is a wife and mom and a graphic designer.

Want to learn more about C. Greenwood or her books? Check out her website at www.cgreenwoodauthor.com or sign up to receive her new release announcements at http://tinyurl.com/3dbegmw

I kept waiting for the story to pick up, but it just never did. Definitely not a stay-up-all-night tale. Three stars for effort.

It's kind of short, but it's okay. Kind of reminds me of the "Fable" video game on X-Box. I'm not disappointed - just not blown away. I already have book two and shall read it also.

This is 1/4 of a full length novel broken into four pieces and being sold for $9. That's pretty expensive for a new author. You will not get to read a full book, but a sample.

Outside of this, the little novella is fine. It takes a couple hours to read and not a whole lot goes on except a teenage girl with a tiny bit of magic makes a bunch of stupid decisions because of immaturity and pays the consequences. No romance to speak of, in case that interests some readers.

This was a great read, I found the plot, the characters, pretty much everything about it enjoyable - and because this was the free version, it didn't bother me that I finished the read in not much over an hour.

But as much as loved this book, even if I could afford the rest I don't think I'd buy them. Ebooks seem to be way thinner page-wise than the paperbacks I read these days. I understand both sides of it I think, cheaper production and lower sale price. But I'm not willing to pay $9 for the next three in the series when all four could have been easily combined and sold as a single $6 paperback at any big-box shop.

That said, it WAS a great read! Read this one even if you don't read the others and if you've got money to burn read them all and tell the poor among us (me :) ) what happens to Ilan!

This book is a first person narrative revolving around a female character named Ilan. She is a young magicker and unfortunately the Praetor has ordered their cleansing. As such Ilan loses her parents and she has to travel to another village to be with others like herself. On the way there the cart Ilan is travel in is attacked by bandits and she is the lone survivor of the attack. Ilan grows up with the bandits, but since they don’t possess magic Ilan has to figure out her magic on her own. During her time there Ilan inadvertently discovers a traveling magicker who offers her a chance to learn about her powers and to develop them. But to do so she has to leave her bandit home, a choice that would lead her to be hunted by the bandits themselves and killed before she could tell of their hiding places.

The book is short and feels like the beginnings of a much larger book. There are other books planned to follow, but part of me wishes the next book could have just been added to this one. Still the descriptions the author uses in this book are wonderful. There’s just enough to help you picture the world without it being overwhelming.

I didn’t realize that Ilan’s true birth name was never mentioned in the book. It took a re-reading to confirm this fact, a testament to the author’s skill to word things so I didn’t take note of it at the time. (The name Ilan is given to her by the leader of the bandit camp, since she refused to speak and give her name.)

Ilan makes some mistakes in the book that made me wince. I’m not sure if it’s because of her personality, or some bout of rebelliousness brought about during her teen years. However it was refreshing to read a character making mistakes and having the face the consequences of them.

I have always loved a good medieval fantasy book and this quenched my appetite very nicely. I’m eager for the next book to see what happens next. The magical bow presented at the end seems like a very interesting concept that I’m looking forward to the author expanding on, along with finding out what Ilan’s magical abilities will fully become.

In summary it’s a very good start of hopefully a longer story.

I enjoyed it. I too will be looking for the rest of the series.

It was a good story as firsts go, i'm guessing it picks up even more in the coming sequels. Fans of David Eddings would really enjoy this series. i'm going hunting for the others. Pls put them on smashwords, thanks.

You have subscribed to alerts for C. Greenwood.

You have been added to C. Greenwood's favorite list.

You can also sign-up to receive email notifications whenever C. Greenwood releases a new book.