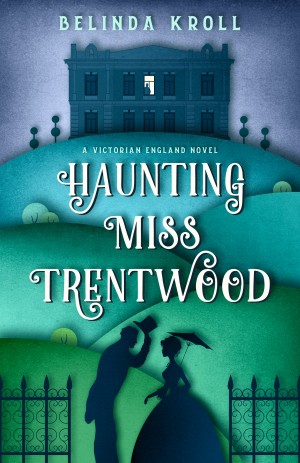 But their quiet home carries secrets even from Mary and Trentwood. When Hartwell, a London lawyer, arrives at their doorstep claiming someone is blackmailing his sister, Mary stumbles into a mystery that forces her to revisit memories and rethink her future.

As Mary and Hartwell seek the blackmailer, each learns about the importance of opening one’s heart to trust and betrayal. Haunting Miss Trentwood is a light gothic tale (think Legend of Sleepy Hollow meets Casper the Friendly Ghost) written from varied perspectives. Readers will be entertained by bright dialogue and encouraged to reflect on the universal themes of dealing with parents and disappointing relationships, and learning to love again.

Belinda Kroll is the author of fiction for kids and teens. She grew up in a home where reading was encouraged and Jeopardy! was on every weeknight. Both activities fostered her love of history. Some of her titles include Catching the Rose, Haunting Miss Trentwood, short story Haunting Miss Trentwood: The Seance, and contemporary short story “The Story of Mad Maxine.” She lives in Central Ohio with her husband and two step-dogs. Go Bucks!

Go to http://worderella.com for more about Belinda. If you enjoy her work, please support the author by leaving a review.

Three Ways to Know Your Father Haunts You
Mary Trentwood has a slight problem. Her father is haunting her. She doesn't want you to suffer her fate, so she has provided three ways in which you can tell if your father is haunting you. Mary is the main character of Haunting Miss Trentwood, the latest book by Belinda Kroll

Review
Moirae Publishing reviewed on May 29, 2011

Overall, this is an awesome read!
I thought the beginning was a little rough, but once I figured out that it was set in Victorian England, the beginning made much more sense to me. But then, this was the first historical romance I've ever read. :)
I think my favorite character was the ghost, though Miss Mary was certainly a close second, for how inappropriately wild she was for a Victorian lady.

I'm not one for historical romances, but I started reading the sample for this one afternoon and couldn't stop.

Well written and funny, this was the perfect book to get lost in for an entire day. I loved the interaction of the characters. The humor is applied perfectly, never over the top, it's a perfect icing.

This book was so much fun to read! I am going to be on the look out for future titles by Belinda Kroll because I absolutely loved reading this one. She combined a twisted plot, believable characters, and ghosts in a page-turning novel. The historical, mystery, and romance aspects were fun, but the most unexpected thing I enjoyed was the interaction with--and description of--the ghosts that had returned to haunt and possess the living.

I'm not a literary critic, rather a person who just wants to read a riveting novel in my spare time, and this absolutely hit the spot for me. Can't wait to read the next one she writes!

Mixed feelings on this book. On one hand, I read it and enjoyed it overall. On the other hand, there were elements that I felt were underdeveloped and required you to make a leap of faith. The characters seemed to behave immaturely and irrationally in several instances and I found myself struggling to determine if there was some context missing that would make it feel more natural. I felt the same about how easily Miss Trentwood slipped into a routine in which she accepted the haunting by her father as a ghost. This isn't a true fantasy story where you immediately take the leap of faith. It's more of a historical romance novel, so I feel some extra help would have been beneficial to set the stage and bring the reader along on the fantasy ride.

But I love to support indie authors and hope to read more by Ms. Kroll.

As a general rule, I don't like historicals. I mean, I love Jane Austen, but other than my annual re-reading of Pride and Prejudice, I don't seek them out. I admit to a prejudice against them from having gotten ahold of a few too many with ninnies for heroines. So I was REALLY pleasantly surprised when I read this book. The heroine is spunky and witty, the hero honorable with just the right amount of rough around the edges. And FUNNY, OMG, I laughed so much during this story! Love, love, love the ghost. The whole situation kept me in stitches. My only gripe was that the ending felt a wee bit rushed. I'd have preferred to see those last few scenes stretched out a bit longer just so I could enjoy it more. But all in all, a delightful read and a good choice for your To Read shelf.

Haunting Miss Trentwood is a beautifully written story set in the 1800s about a young woman who's father is haunting her. Miss Trentwood was left her father's estate and her only family is Mrs. Durham, her mother's twin sister. When Mr. Hartwell makes his presence, Mrs. Durham is put on edge while Miss Trentwood is rather intrigued by his ghastly scar on his face. Mr. Hartwell announces to Miss Trentwood that he has come to find the person who is blackmailing his sister and everyone is a suspect. What no one knows however, is that the blackmailer is dangerous and won't think twice about hurting those who get in their way.


I don't know how someone can find humor in a story about your dead father haunting you while a dangerous blackmailer lives under the same roof as you, but Belinda Kroll found a way. If you enjoy Haunting Miss Trentwood, I highly recommend her first novel Catching the Rose. Belinda Kroll is the Queen of Quirky Historical Fiction.

Haunting Miss Trentwood was an enjoyable historical/paranormal read. While many of the usual suspects that you would find in an Austen novel are represented, Miss Kroll gives them a supernatural tweak.

The heroine, Mary, has suffered great loss: Both of her parents have died and she is left in charge of the debt-ridden crumbling family manor. Since the day of her father's funeral, when she is sure that she saw her father crawl from his grave, Mary has been haunted by him. I loved this father/daughter relationship. Mr. Trentwood was not a perfect man, but he was caring father who wanted to see his daughter live a happy life, so much so that he haunts her until she does what he knows is best for her!

Mary has another man looking out for her, her butler/houseman Pomeroy. Pomeroy has some of the best lines in the book and is a funny and loveable character. He snoops and orchestrates and protects Mary-he is like her other parent.

Mr. Steele is the handsome suitor/buffoon. Rejected as an acceptable mate for Mary by Trentwood, Steele continues on his merry way and forgets about Mary until he comes to the manor to read Trentwood's will. Steele is good for comic relief-he's pretty to imagine and slightly silly, but not malicious.

Mrs. Durham, Mary's aunt who lives with her, was the least fleshed out character for me in a novel of great characters. We are told she is evil and crazy, but don't see a lot of evidence of this until near the end. I perhaps wanted a bit more backstory on her.

I've saved Hartwell for last. You are meant to swoon at his frankness, his dashing, his destroyed former good looks, and I certainly did. The banter between him and Mary is classic. You know they're going to end up together from the start, but the journey is delicious.

I would recommend this book to anyone who likes historical romance. The paranormal aspects only add to the story and don't make it too "weird" or stray too far from the genre.

I've been reading (and writing) so many modern paranormal romances, that I had to get used to the voice of this book. The style is just a little old fashioned, and it reminded me a lot of books I read in high school. This was definitely a ghost story, and it was set in the 1800's, but it wasn't typical by any means. There was a lot of quirky humor in this book, especially when Mr. Trentwood was around. And I love quirky humor.

I was really entertained by this book and I enjoyed it even more than I thought I would. It was one of those books where I carried my Kindle around reading, almost running into walls. :) Great story!

Belinda Kroll describes herself as writer of "quirky historical fiction". I totally agree. I love historical fiction and I have read a lot of it. But I have never read a historical fiction like this one. There is romance, suspense, humour,drama and even the supernatural. Infact it reminded me a lot of Victoria Holt books which I devoured as a 16 year old.

The character development was great. You can't help but like Mary Trentwood. She is brave and has a great sense of humour. Alexander Hartwell is so different from the usual "sexy mysterious " heroes. I instantly liked him. The scenes and dialogues between him and Mary are very enjoyable.

Add to that , the ghost of Mr Trentwood whose one-liners created several laugh-out loud moments.
Then there is the whole suspense angle to the story...There is so much happening in every page you turn, that you can't wait to see what happens next.

Despite all the humour and mystery, there is still more depth to the story. Losing a parent is one of the hardest things to cope with. I think this book has captured that well , but with a twist.

This was a perfect Halloween read for me!

You have subscribed to alerts for Belinda Kroll.

You have been added to Belinda Kroll's favorite list.

You can also sign-up to receive email notifications whenever Belinda Kroll releases a new book.