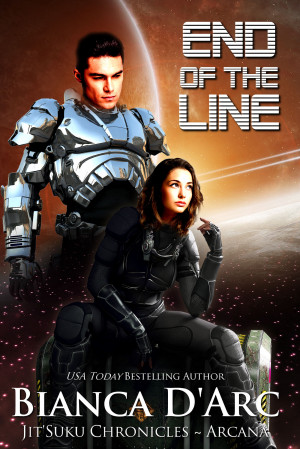 End of the Line

Enemy Captain Val downs a female fighter pilot out near the Galactic Rim. Her name is Lisbet and she’s about to rock his world.

Their attraction is mutual and explosive. She can’t resist him, but she hates being a prisoner. Lisbet doesn’t know a lot about his culture and it’s clear he doesn’t understand humans. It’ll be fun educating him about just how fierce... and loving, a human woman can be. More
Enemy Captain Fedroval – Val for short – shoots down a one-man fighter out near the Galactic Rim, but the pilot, much to his surprise and horror, is a human woman named Lisbet Duncan. The alien warriors have a strict code. In their culture, making war on females is a shameful stain on one’s honor. The captain doesn't quite know what to do with Lisbet, but he can't let her die alone in space. He orders his men to tow her life pod into their battle ship.

Val is the last of his line – heir to a doomed legacy – because no respectable jit'suku woman will have him after the destruction of his family. He has put all his considerable resources into building his state-of-the-art battleship and joining the fight to take the human galaxy, hoping to restore his honor in some small way. This is Val's first foray into human space and his first encounter with a human female. He finds her strangely alluring and altogether irresistible.

Lisbet is attracted to Val as well. When he puts the moves on her, she can't resist his masculine charm, but she doesn't like being a prisoner - even if she is being kept in a gilded cage, treated more like a guest. She doesn’t know a lot about jit'suku culture and it's pretty clear they don't understand much about humans. It's going to be fun educating her captor about just how headstrong, fierce... and loving... a human woman can be.
Available ebook formats: epub mobi lrf pdb
First 10% Sample: lrf pdb
Price: $0.99 USD
Buy Add to Library Give as a Gift
How gifting works
Create Widget
Tags: space opera aliens futuristic futuristic romance science fiction romance alien romance sci fi romance sf romance bianca darc jitsuku
About Bianca D'Arc

Reviews of End of the Line by Bianca D'Arc

You have subscribed to Smashwords Alerts new release notifications for Bianca D&#039;Arc.