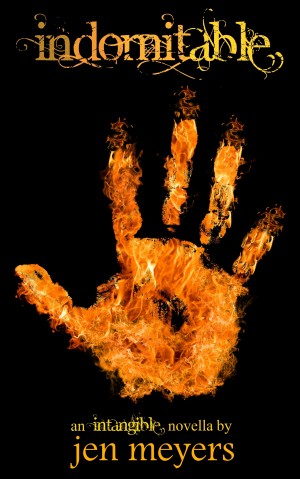 Jen Meyers grew up in Vermont, spent three years in Germany when she was a kid, and now lives in central New York. When she’s not reading or writing, she’s chasing after her four kids, playing outside, relishing the few quiet moments she gets with her husband, and forgetting to make dinner.

She is the author of the Happily Ever After series, Anywhere, the Intangible series (a young adult contemporary fantasy), and co-author of the Untamed series.

You can visit Jen online at www.jmeyersbooks.com.

Reviews of Indomitable (an Intangible novella) by Jen Meyers

I received a copy of this story from the author in exchange for an honest review.

Wow! This was a hard hitting, emotional punch in the gut kind of read. I've always been curious about Jonas's backstory and by taking a look into his past, I was given a lot of insight into his present actions and motivations. What he went through in his human life before becoming a vampire was shocking and knowing similar events happened in real life during that period of time in this country is difficult to read about let alone imagine. I couldn't help but shudder.

I can completely see how Jonas becomes the way he is now, and he's become even more likable to me. I've always had a soft spot for him. The action alternates between the past and present, and you can see how his past has affected him. There isn't much diversity in the YA genre, in my opinion, and so it's refreshing to have a major character such as Jonas of a race other than white--he's African American. He's intriguing, conflicted, and complex, and I just really love trying to figure him out. He's an enigma--there are so many layers to him just waiting to be peeled back...I love it!

This is an action-packed, fast paced story that gives us a look from Jonas's perspective and tides us readers over until the next novel comes out. I'm counting down the days in the meantime!! :)

You have subscribed to Smashwords Alerts new release notifications for Jen Meyers.

You have been added to Jen Meyers's favorite list.

You can also sign-up to receive email notifications whenever Jen Meyers releases a new book.