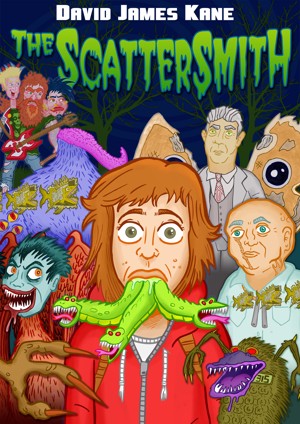 By David James Kane
What if your life depended on the attention span of a teenage boy? More
Paddy Lee, a mollycoddled sleepwalker, mopes about in a backwater town. But then the soul-gorging Blackgum lay siege and begin to pick off his schoolmates and loved ones. Only an irritable moth-mage and Platto - his attack-calculator and semi-smartphone - will stand with Paddy to oppose oblivion. And the Blackgum strikes aren’t random. To save his family and his town, the distracted daydreamer must concentrate long enough to unmask and confront the most fearsome monster of all: the Zealtor.

For Paddy Lee is a Scattersmith. Though he’d rather wait for his life to come out on DVD.

A plot-driven tale told with wit, the novel features an unstable world of Forgers (creators/discoverers), Ferine (wild beasts/plants), Passengers (couch potato-drones), Witches (priests of lapsed gods), Helpers (object-spirits), and an eccentric supporting cast, including a gluttonous French horn, a multi-headbanging Giant, a guard budgie, a lovesick pinball machine, a school of psychotic piranha-stamps, a poltergeist-puddle, a plesiosaur, Manticore twins and a bullmop.

I was born in an old gold mining town in Victoria, Australia. I grew up listening to ghost stories around school campfires, and started to write my own in second grade to scare my sisters. Senseless!

Years later, on the other side of the world, I took a job at an investment bank. There, I learned a lot about monsters - and not the pretty-pouting-perfumed vamps and well-groomed werewolves you read about or see on screens.

My horror stories have been published all over the place, including in Agog! Ripping Reads and Andromeda Spaceways Inflight Magazine Best of Horror 2. Reviewers have described my work as "clean and tight, the protagonists nicely formed, and some of the descriptions truly terrific...gruesome in the casual way of Clive Barker's Everville" (Angela Slatter, Australian SpecFic in Focus) and as "mixing elements of horror, action and science-fiction...[with] beautifully realised battle scenes and an interesting internal battle within the hero's mind...an interesting and original take on the monster hunter genre" (Mark Smith-Briggs, Horrorscope).

So let me tell you the truth about real monsters…

You have subscribed to alerts for David James Kane.

You have been added to David James Kane's favorite list.

You can also sign-up to receive email notifications whenever David James Kane releases a new book.