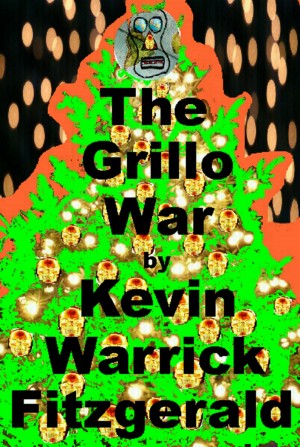 By Kevin Warrick Fitzgerald
The sequel to The Crunch Case. The most powerful mafia lord in the country wants Inspector Warren dead. After a botched attempt on his life, Warren gathers his allies and goes after his enemy, but immediately learns that he is the one who is hunted. He soon realizes that he is up against the most cunning adversary he has ever faced, with an all out war of subterfuge, nerves, firepower, brutality. More
Warren’s head bounced off the pillow when he heard the board squeak, for he knew that squeak well. It was on the fifth step leading upstairs to his bedroom from the front hallway. Since he had no pets, he instinctively knew that it must be a human coming up those stairs. And there was only one reason for someone to be coming up his stairs at this time of night.

He eased his hand down between his mattress and the wall and latched onto a .45 automatic as he flipped off the covers and rose out of bed. He took a moment to slip both pillows under the blankets to make it look like he was still sleeping there, then glided over and put his back into the corner on the far side of the bedroom, and waited.

He didn’t have to wait long.

The bedroom door was already ajar and he watched as it slowly and silently opened a little farther. Warren could see three dim human shapes out in the hall in the
reflection of the mirror on his dresser beside the bed. They, he knew, could not see him in the corner where he was hiding because of the utter darkness inside the room.

One of the men stepped over the threshold, but remained behind the door from Warren’s perspective, and began firing a silenced revolver into the mass under the blankets. The other two followed suit. Bullets passed through the covers, pillows, mattress and box spring, and thudded into the floor.

Warren knew it was only a matter of moments before they realized that he wasn’t in his bed. He judged the distance, moved out into the center of the room and fired his gun through the door. The blast sounded like a thunderclap in the small room. The bullet hit the first man in the neck, nearly severing his head, and he dropped like a sack of wet corn

The other two men stopped firing and cringed.
Warren didn’t chance shooting through the wall because he didn’t know where the studs were or the wiring was that could deflect his shot, so he slowly moved a little more to his left and closer to the dresser.

Not knowing the layout of the room, the second man saw Warren’s shape in the mirror and fired, shattering the glass which tinkled to the floor.
Warren fired through the door three times in rapid succession, putting the bullets eight inches to the right each time. The third round took the second man in the chest and he fell backwards with a grunt.

Then Warren raced over to his right and crouched beside the wall as the third man fired five quick shots through the door, the last of which broke the door into two pieces lengthwise, and half of it slapped onto the floor.

Warren stayed crouched knowing he could either shoot the third man if came into the room, or hear him if he turned and ran.

He turned and ran. Warren heard his footsteps thump the length of the hall and start down the front stairs.

Warren jumped to his feet, raced out of the room but, instead of following the man down the front stairs, he took a left and raced down the back stairs by the kitchen. When he arrived on the first floor, he looked around the corner into the living room and saw the third man running for the front door on the far side of the apartment. Warren stepped out and fired. The bullet nailed the third man square in the back and it threw him against the front door with a thud. He slithered onto the rug with a flop.

Mr. Fitzgerald lives south of Columbus, Ohio, and is hard at work on his next book. 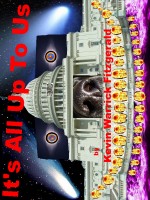 You have subscribed to alerts for Kevin Warrick Fitzgerald.

You have been added to Kevin Warrick Fitzgerald's favorite list.

You can also sign-up to receive email notifications whenever Kevin Warrick Fitzgerald releases a new book.