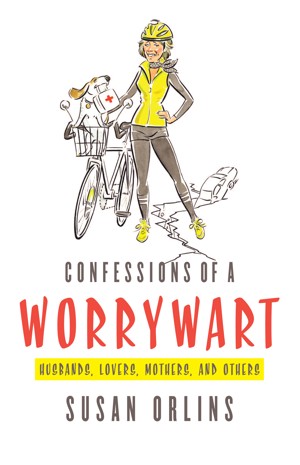 Confessions of a Worrywart (Husbands, Lovers, Mothers, and Others)

Award-winning journalist Susan Orlins began chronicling her worries in 2009 on her blog, Confessions of a Worrywart. She also contributes to Huffington Post and writes about food, relationships, travel, and more on NBC Universal’s Life Goes Strong website.

Orlins has published in The New York Times, Newsday, The Pennsylvania Gazette, and The Washington Post Magazine. For several years, she was a contributing editor at Moment Magazine, where she received a Rockower Award for her profile of sociolinguist Deborah Tannen.

After adopting an infant in China in 1986, Orlins wrote a letter home that appears in Women’s Letters: from the Revolutionary War to the Present. Chicken Soup for the Soul published her essay “Marathon Women” in Like Mother, Like Daughter, Our 101 Best Stories.

In addition to her roles of worrywart, writer and mother, Orlins identifies most strongly as a bicycle rider. But don't mistake her for a sleek, zippy cyclist hunched over racing-style handlebars. She is none of that. Rather, she plods along high and upright, arms spread wide, more Mary Poppins than Lance Armstrong.

Worrywarts can be versatile, so Orlins' anxiety casts a wide net. Her blog post "White Girl Worries" addresses her worry that she will appear frivolous and insensitive to those with real worries.

Orlins is the divorced mother of three daughters in their twenties and thirties, who are what she worries about most. She leads a nonfiction workshop for homeless people in Washington, D.C., where she lives with her aging pound hound, Casey, about whom she also worries.

Reviews of Confessions of a Worrywart (Husbands, Lovers, Mothers, and Others) by Susan Orlins

You have subscribed to alerts for Susan Orlins.

You have been added to Susan Orlins's favorite list.

You can also sign-up to receive email notifications whenever Susan Orlins releases a new book.