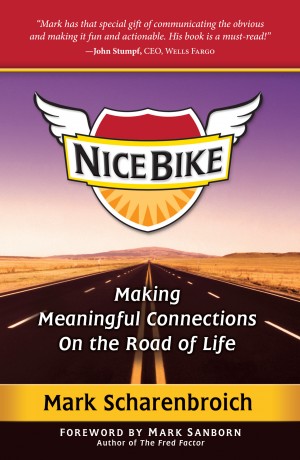 Nice Bike - Making Meaningful Connections On the Road of Life

By Mark Scharenbroich
A collection of stories based on making meaningful connections with others in both your work and in your life. Nice Bike can help you with your daily interactions, create more meaningful relationships and add more joy in your journey on the road of life. Acknowledge, honor, and connect and you will change the world, one person at a time.
Available ebook formats: epub mobi pdf rtf lrf pdb txt html
First 25% Sample: epub mobi (Kindle) lrf more Online Reader
pdb
Price: $6.95 USD
Buy Add to Library Give as a Gift
How gifting works
Create Widget
Tags: business humorous stories motivation success thinking personal effectiveness leadership managing people development coaching
About Mark Scharenbroich

Mark Scharenbroich is a keynote speaker and humorist based in Minneapolis, Minnesota. He was featured in the 1981 Jostens film, *The Greatest Days of Your Life . . . (so far)*, which was viewed by millions of high school students in the 1980s. He has earned an Emmy award, and his video programs have received a Silver Screen, Golden Apple, Telly, and International Health and Medical film awards. He has also been inducted into the National Speakers Association’s prestigious Hall of Fame. Mark speaks internationally to associations, business groups, and educators. Visit Mark Scharenbroich online at www.NiceBike.com.

Review
John Tharp reviewed on March 28, 2013
(no rating)
Bought the book nice bike but won't download to my iPad

(reviewed the day of purchase)
Delana Boggess reviewed on Aug. 1, 2011
(no rating)
Purchased Nice Bike, I've seen the author speak publically, it was wonderful and very entertaining. I loved the book, I'm not that sentimental but I cried several times, the stories were just that uplifting. Could'nt speak more highly.

You have subscribed to alerts for Mark Scharenbroich.

You have been added to Mark Scharenbroich's favorite list.

You can also sign-up to receive email notifications whenever Mark Scharenbroich releases a new book.