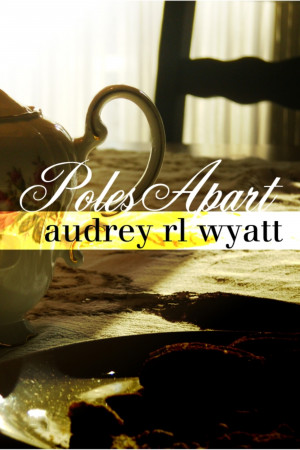 By Audrey RL Wyatt
Rated 5.00/5 based on 1 review
CHAIM SCHLESSEL lost his family to the Holocaust more than sixty years ago. DAVID SCHLESSEL, grown, married and successful, is plagued by the always taboo subject of his father’s suffering at the hands of the Nazis.

Audrey Wyatt, right-brained to a fault, has worked in various arts – most notably acting, teaching and creating children’s theater curricula. Now a fiction writer, she bases her novels, short stories and even a television sitcom on her experiences and culture. Her stories often feature strong-willed, quirky women. Audrey’s novel, Poles Apart, has been honored with five awards and her essays and short fiction have been published in various forums, both print and online. For a full list of Audrey’s credits as well as links to her work, check out her Bibliography.

Always one to foster aspiring artists, Audrey founded Southeast Valley Fiction Writers near Phoenix, Arizona, and Bay State Writers in Southeast Massachusetts. She is a founding member of LitSisters and LitSisters Publishing. She also teaches Creative Writing in continuing education and Memoir Writing to Seniors.

Audrey has enjoyed living all over the country, from the Rockies to Boston Harbor. She currently makes her home in the Valley of the Sun with her incredible husband, their two terrific teenage daughters, and their beagle-basset mix, the Artful Dodger.

A good story shows us people struggling to change, to make life better. It makes us care about them enough to forget that we’re reading a story and inspires us to changes of our own. The characters in Poles Apart are lovable in their humanness and forgivable in their fears and confusion, particularly since the patterns with which they struggle result from some of the most horrendous experiences possible.

Chaim Schlessel spent nearly half of his formative teen years in Auschwitz and lost his family there. He committed to living his life fully and joyfully as the only way to make sure the oppressors failed in their attempt to destroy him and his people. Unfortunately his refusal to speak of the past created a void for his son David, who when confronted with the atrocities that obliterated his family, had no way to comprehend or integrate such history. This is a story about the damage to good people when truth is feared and fear deepens the darkness inside. It is a delightful snapshot into the dynamics of a modern Jewish family living in a typical mid-western city—Cleveland, OH. It is also a testament to the ability of loving family (whether it’s the one you were born into or one you chose) to heal the wounds of the past and support the freedom to be authentic.

While Poles Apart is a pleasurable read, it does not dodge the horrors that are part of our collective history. The memories of horrors that are meted out in tolerable measure still cause the stomach to clench and the body to shiver. Wyatt does an admirable job, particularly since she writes based on personal knowledge. It is appropriate and necessary to hold the human potential for destruction in consciousness. Americans are not exempt. The holocausts in this country began with the extermination of 19 million Native Americans and continued with blacks, Chinese, Irish, Italians, Japanese, and now threatens Hispanics and any others who become “demonized” by the perceived ruling class. Adolph Hitler actually stated that he used the model of the U.S. Government’s treatment of Native Americans in his design for the concentration camps.

This book does not try for the kind of distance that addresses the mass manipulation of citizens by their government. It is close to home and heart—close to the places where you and I live in modern cities with a relative sense of security. It reminds us of the ripple effect that violence and degradation have on people, families and communities. It is time that we acknowledge that like the adult children of alcoholics, the adult children of survivors of any violence also carry scars in their psyche. Ultimately, this story of the Schlessel family reminds us that we do not remain victims unless we choose to. Chaim Schlessel demonstrates profoundly that who we struggle to be and how we live is ultimately the place of victory.

You have subscribed to alerts for Audrey RL Wyatt.

You have been added to Audrey RL Wyatt's favorite list.

You can also sign-up to receive email notifications whenever Audrey RL Wyatt releases a new book.