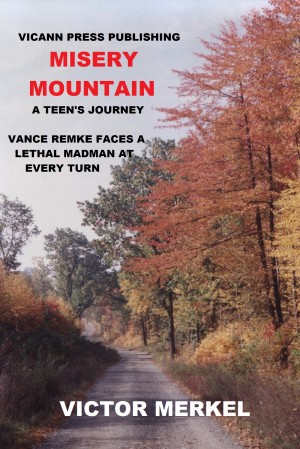 By Victor Merkel
Murder, suicide, rape, witnessed through the eyes of an angry teenager. Follow Vance Remke as he discovers shocking family secrets and befriends a bootlegger, who teaches him humanity and coal mining. But the bootlegger's daughter hates Vance and threatens his life. He fights to keep his girlfriend and kills a child to stay alive. Vance brings justice to his enemies but at what price?

Many years prior to earning a reputation for writing serious novels and non-fiction, Victor Merkel worked as field sales engineer for a Chicago firm; however, his evenings filled with dire passion for writing articles, short stories and novels.
-
Born to a bricklayer and home-maker in rural East Pennsylvania, Victor attended Tamaqua High School. After serving in the U.S. Army, he majored in business administration at the University of Wisconsin-Platteville.
-
During the peak of his career as a sales executive, he secured multi-million dollar contracts with international companies to produce and distribute industrial electronics.
-
Merkel's life as a struggling teen inspired him to write his first published novel – Misery Mountain. His success caught the attention of Joseph Baca, activist, who commissioned him to write Constant Reminder, a biography.
-
Tailgunner fulfills a long-time dream to honor Victor’s eldest brother, Walter C. Merkel, Jr., for service to his country during World War Two.
-
Victor Merkel and his wife Fran Merkel, reside in Arizona. They are parents of a daughter, Deb Merkel Wanamaker, who lives with her family in Pennsylvania.

You have subscribed to alerts for Victor Merkel.

You have been added to Victor Merkel's favorite list.

You can also sign-up to receive email notifications whenever Victor Merkel releases a new book.