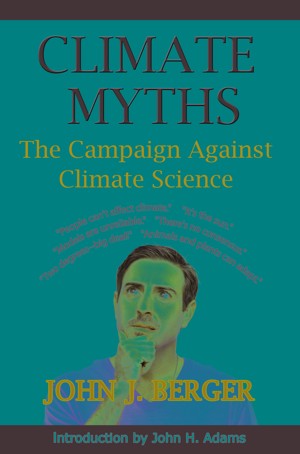 John J. Berger is an American climate specialist and consultant who has written and edited eleven books on energy and environ-mental issues. His latest book, Climate Myths: The Campaign Against Climate Science, offers a definitive rebuttal of climate science skepticism and denial. He is also the author of the forthcoming Climate Peril: The Intelligent Reader’s Guide to Understanding the Climate Crisis (Spring 2013). It explains how climate normally functions and the perilous consequences of disturbing it. A third climate book for lay readers, Climate Solutions: Turning Global Peril Into Jobs, Profits, and Prosperity will also appear in 2013.

Dr. Berger has consulted to the National Research Council of the National Academy of Sciences, Fortune 500 corporations, nonprofit groups, and governmental organizations, including the U.S. Congress. He was co-founder and director of the Nuclear Information and Resource Service, Inc. of Washington, D.C. and founded Restoring the Earth, Inc.

His office is located in Berkeley, California where he writes on climate, energy, and natural resources and provides scientific and technical writing as well as editorial consulting services to businesses and individuals.

This book is an excellent primer regarding the denial and disavowal of science in the United States among pseudo-conservatives and Free Market Fundamentalists: the hysterical conspiracy-mongering paranoia that has swept through what is now the dregs of the Republican Party (a vastly different party than in the time of Lincoln and Ingersoll). As the author clearly documented in this book, that hysteria has been and is being fueled by the fabulously wealthy corporate interests that own and run the country, and the American citizenry on the whole are not mentally and educationally equipped to defend themselves against the greed-driven and well-funded disinformation campaign.

The science behind human-caused climate change is almost 200 years old, and among scientists the issue of if it has happened and is happening has been settled for over 50 years: among scientists, the skeptics were swayed by the facts and evidence long ago, before most of us now living were even born (see, for example, the Johnson Administration's warnings to the American citizenry on the pending crisis)--- and the evidence showing humans have caused and are causing climate change has only gotten stronger since then. The fact that a large minority of Americans still do not know this fact is largely due to disinformation and misinformation being spewed chiefly by political ideologues, over 170 of whom are currently members of the United States Congress: a frightening and chilling fact.

In this book are a tiny few examples of the myths being told about science by the anti-science paranoid alarmists that rule and own the USA media, the Corporate America Government, and the pseudo-conservative movement. There are literally hundreds of lies and falsehoods being spewed by these people and their "think tanks," all of which are designed to generate doubt among the ignorant regarding the conclusions of science and scientists.

Polls in the USA consistently show that among conservatives, moderates, and the few remaining liberals left in the country, support to mitigate the crisis by changing our energy behavior is overwhelming; only among the pseudo-conservatives (currently, the USA Republican Party) is there opposition. The "will of the people" is very clearly that of ACTING NOW, DECISIVELY, is what the large majority want their government employees to do; sadly, those employees have ignored that mandate, in exchange for wealth being showered down upon them by the wealthy corporations that perceive a loss of profit (in most cases, imaginary) by the change of energy consumption behavior.

You have subscribed to alerts for John J. Berger, Ph.D..

Would you like to favorite John J. Berger, Ph.D.?

You have been added to John J. Berger, Ph.D.'s favorite list.