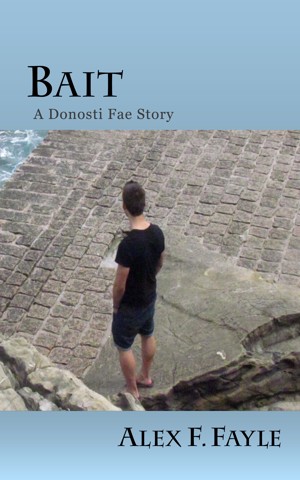 By Alex F. Fayle
It took Daniel, a young Brit visiting the Basque city of San Sebastian, all of three days to fall in love with the city and never want to leave.

Want to know more about me? Well, for one thing, not long ago, I lived without my soul.

You see, when I was twelve years old, I made a decision to live in Europe and write fiction. So off my soul went to find that dream, while I went to school, got a job, and bought a house in the city.

And so my soul got lost on the Someday Sea, waiting for me to catch up to it.

Then one day, I woke up to the ache I felt where my soul should have been. So, I walked away from everything: from a budding career as a Professional Organizer and as President of Professional Organizers in Canada, from my house, my cats, my friend and from my family – all to go find my missing soul

I found it, as well as my writing dream and love in northern Spain, where I now write for a living, as I always wanted to.

But you know what? That’s not enough. I’m so amazed at how fantastic my life is now that I’ve gotten rid of the word someday from my life, that I decided to go back out on the Someday Sea to hope others cross it.

Because yes, there are others – maybe you? – adrift on the Someday Sea, people who want to change jobs, change countries, change spouses, write a book, run a marathon, or run for office. People who don’t know what they want, just that life isn’t quite right.

Maybe you don’t even know you are adrift on the Someday Sea at all, thinking that you’re stuck in a rut, swimming against the current, spinning your wheels, or trapped in a cage.

And so armed with a cure for Someday Syndrome, I help people just like you cross the Someday Sea safely and live your dream life, just you’ve always wanted.

As for the “why the heck should I listen to this guy stuff”? Well, I have a Master of Information Studies from the University of Toronto, I was President of Professional Organizers in Canada from 2004 to 2006, and I’ve followed through on my dream and have had my fiction published in an anthology of short stories and online.

You have subscribed to Smashwords Alerts new release notifications for Alex F. Fayle.

You have been added to Alex F. Fayle's favorite list.

You can also sign-up to receive email notifications whenever Alex F. Fayle releases a new book.