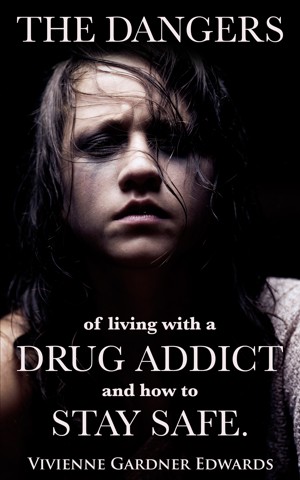 The Dangers of Living with a Drug Addict and how to Stay Safe.

By Vivienne Gardner Edwards
Living with a drug addict can be dangerous. Drug use affects not just the user but everyone else around them. Children are especially vulnerable. This book spells out some of the dangers that most non-users are unaware of, and also makes suggestions as to what things to watch out for. Being armed with this knowledge can make living with a drug addict safer and could possibly save lives. More
Living with a drug addict can be difficult if not downright dangerous. This book explores the various unhealthy things that can go along with drug abuse in the home. Children can be placed in a particularly dangerous position when being cared for by a drug addict. From fires to infections and from theft to suicide, this book covers many of the things that can happen with a drug addict in the household. The author dealt with this in her home for a number of years and now shares what she learned to keep herself safe. This knowledge could help others avert a tragedy.
Available ebook formats: epub mobi pdf rtf lrf pdb txt html
First 20% Sample: epub mobi (Kindle) lrf more Online Reader
pdb
Price: $4.99 USD
Buy Add to Library Give as a Gift
How gifting works
Create Widget
Tags: sexual abuse suicide theft domestic violence drug addiction lying drug paraphernalia
About Vivienne Gardner Edwards

Vivienne was born in England and was educated in Oxford. After her marriage, she moved to the United States with her husband and two daughters. After living in both Michigan and Minnesota, she currently lives in the beautiful Willamette Valley in Oregon.
While in Minnesota, she began homeschooling her daughters and started the Minnesota Homeschoolers Alliance, a statewide homeschooling network that has grown into a large non-profit organization. She wrote a number of articles and booklets on home education, coached parents and has been invited to speak at numerous state and national conferences.

After moving to Oregon, she became a speaker on domestic violence for a local women's shelter. After her divorce, she shared a house with a woman who she ultimately discovered was a heavy drug user. During those years she dealt with the daily effects of a drug user in the house. After finally realizing that she was part of the problem and not part of the solution, she made immediate changes to ensure her own personal safety. Afterwards, she started a local drug education network, working with local law enforcement and schools to educate others about drugs and their effects on both the user and the family. After two years, she wanted to expand the reach of this work so she created an educational website dedicated to the support of families of drug users. During this time, she also became a caregiver for a woman friend who was a disabled Veteran. She gained much experience dealing with the VA and learned a great deal about our Vets who also have drug addiction problems.

In her spare time, when not writing, she cares for her dogs, two of which are disabled, and her group of rescued cats. Several new books will be available soon, including a comprehensive workbook dedicated to helping those suffering from Post Traumatic Stress Syndrome or PTSD, especially targeted to military personnel, and in lighter tone, a series of adventure novels.

The Reality of Living with an Addict.
The pictures in this short video presentation show my house as it was after Jeanette left. No retouching was done on these photos. This is life with an addict in the house.

Reviews of The Dangers of Living with a Drug Addict and how to Stay Safe. by Vivienne Gardner Edwards

You have subscribed to alerts for Vivienne Gardner Edwards.

You have been added to Vivienne Gardner Edwards's favorite list.

You can also sign-up to receive email notifications whenever Vivienne Gardner Edwards releases a new book.