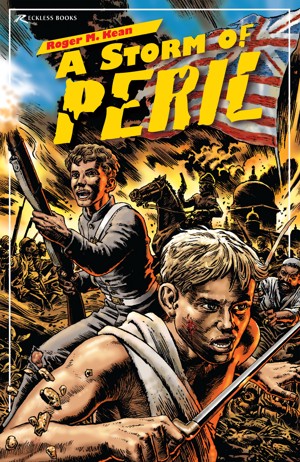 A Storm of Peril

By Roger Kean
1857 – The terror of the Indian Uprising against British rule… As hell breaks loose, two teenage brothers, Ned and Dick Warrener, and their family are plunged into the maelstrom – hunted fugitives from appalling violence. On their desperate trek through a mutinous country they must brave extreme perils if they are to survive. Only courage, cunning, and sheer tenacity will see them through… More
1857 — The terror of the Indian Uprising …

It isn’t every day that you get to dress in a freshly slaughtered bear skin while your brother wears the scalp of a slain fakir, but that’s all in a day’s work for two young lads.

A terrible misunderstanding about the grease used on the British musket cartridges sparks a bloody rebellion against British rule. As all hell breaks loose, two teenage brothers, Ned and Dick Warrener, and their family are plunged into the maelstrom to become hunted fugitives from appalling violence. On their desperate trek through a mutinous country the brothers must brave extreme perils if they are to survive. Only courage, cunning, and sheer tenacity will see them through battles and savagery…

In this action-packed epic about a crucial moment in British colonial history, Ned and Dick witness the sieges of Delhi from the outside, of Lucknow from within, the massacre of innocents at Kanpur and are are thrown into dangerous adventures that will turn them from boys to men.
Available ebook formats: epub mobi pdf rtf lrf pdb txt html
First 20% Sample: epub mobi (Kindle) lrf more Online Reader
pdb
Price: $2.99 USD
Buy Add to Library Give as a Gift
How gifting works
Create Widget
Tags: courage india bravery massacre spying indian mutiny delhi teenage adventure thrilling adventure lucknow teenage action sepoy mutiny bibigarh kanpur relief of lucknow siege of delhi siege of lucknow
About Roger Kean