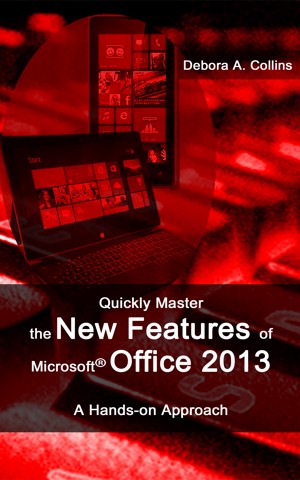 By Debora A. Collins
This book is for the busy person who wants to quickly learn "what's new" in Microsoft Office 2013! It assumes the reader is already familiar with the basic use of one of the earlier versions, either Office 2007, Office 2010, or Office 2011 for Mac. Hands-on demonstrations are included. Office workers, students, teachers and IT Professionals will find this book concise and easy to follow. More
About the Book: Are you a busy person who wants to master Office 2013 as quickly as possible? This book will save you time by covering only the new features and changes. If you are already familiar with the Ribbon in either Office 2007, Office 2010, or Office 2011 for Mac, then this book is for you.

Chapter One explains how to use this book based on your learning style - do you prefer to learn by reading, or by doing? It discusses the different editions of Office 2013 and shows you how to install a free trial version from Microsoft.

Chapter Two introduces the Cloud and how Office 2013 uses cloud-computing to make installation, updates, and file sharing easier across multiple devices - such as computers, tablets, and phones. It demonstrates how to setup a free SkyDrive, so you can share files with friends and colleagues. It also provides a summary of all the new features added to each application in Office 2013.

The remaining chapters cover Word, Excel, PowerPoint, OneNote, Outlook, Access and Publisher. These chapters contain demonstrations that let you explore all the new features with step-by-step instructions. Support files for the demonstrations are provided via download from the author's website.

Editions covered by this book are:

About the Author: Debora A. Collins is well-known in the Microsoft Office education community and has helped thousands of people worldwide become more proficient with Office - including teachers, trainers, and even Microsoft employees! She has an M.S. degree in Education with 25 years experience developing curricula, teaching courses, and speaking at national conferences. Debbie is a Microsoft Office Master and a Microsoft Certified Trainer. Debbie is currently owner and Senior Education Consultant for Certibility, LLC.

Debora A. Collins is a Microsoft Certified Learning Consultant (MCLC) and a well-known educator in the Microsoft Office community. She has an M.S. degree in Education from Brigham Young University (1985) with emphases on Curriculum Development, Instructional Methods, and Computer Science.

For the past 25 years, Debbie has been immersed in classroom and remote instruction to learners of all ages within academic, government and corporate organizations. She writes curricula about a variety of Information Technologies. Included in her most recent projects has been the development of a series of preparation workshops for the Microsoft Office Specialist (MOS) certifications versions 2003 through 2013. Debbie speaks at numerous International, National, Regional, and State-level conferences where she educates audiences on the value of MOS certification while demonstrating the features of the latest version of Microsoft Office.

She travels between two residences - a condo in Salt Lake City, Utah where she bases most of her work; and a small family farm located outside of Medford, Oregon. In her spare time Debbie enjoys dancing, camping, traveling, genealogy, SCUBA, and playing a variety of sports.

Learn more about Debora A. Collins

You have subscribed to alerts for Debora A. Collins.

You have been added to Debora A. Collins's favorite list.

You can also sign-up to receive email notifications whenever Debora A. Collins releases a new book.