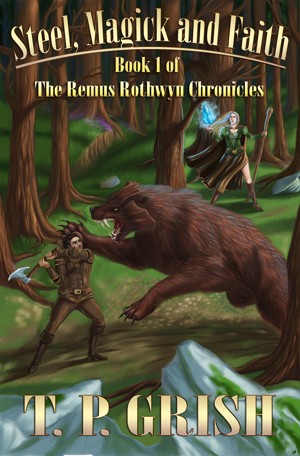 Steel, Magick and Faith: Book 1 of The Remus Rothwyn Chronicles

By T.P. Grish
Rated 4.00/5 based on 1 reviews
In the ancient world of Glenryth, Fey creatures stalk the wilderness outside the reach of human settlements and the protection of their religious and technocratic cults, unable to comprehend the nature of the young race of Man.

Dwarves wreak a curse upon the town of High Peaks and murder pilgrims, and the discovery of the dead body of a local ignites a devastating war between Humanity and Fey. More
In the ancient and wild world of Glenryth, Fey creatures and a nascent humanity have come into conflict, the motives of each other mutually unfathomable and alien.

Technological cults and Monotheistic religions are worshipped, any suspicion of pagan or Fey magickal taint is reviled. Prophets spread far and wide, offering hope and comfort to the beleaguered masses. Mankind is not totally separate from the energies that suffuse Glenryth, as an unfortunate few are born as Touched.

When local dwarves put a curse upon the town of High Peaks, Remus, the aloof and irritable woodcutter and sage, must try and ebb the tide of xenophobic anger that could engulf himself and any other folk that are labelled as outcasts. But when a caravan of technocrat pilgrims fails to arrive, and the body of a local child is found in the woodlands, Remus, along with the capricious Touched Elaina, must try to understand the nature of morality in a world cloaked in suspicion and fear, and, ultimately, to prevent a brewing war that could send the region spiraling into chaos and destruction.

T.P. Grish devoured fantasy books since he was a kid, particularly liking character-based fantasy novels with exciting sequences, complex stories and a lode of deeper meaning. Although he also loved fantasy movies and hobby gaming, his dream to write his own fantasy novels was always at the forefront. Today, he is a PhD doctoral student and part-time business writer who can't help but daydream about writing novels for you to read.

I received a free copy, through LoP, in exchange for a review.

The Fey creatures have lived a harmonious life, but then the introduction of humans threaten to destroy their way of life. Humans are quickly evolving and starting to encroach upon their lands. There was once a treaty, to pay homage and respect to the Fey kind, but that is slowly being forgotten, upsetting the natural flow of life. Not only do you have this aspect of life, there are also humans that are born with a magically side, called Touched and they are looked down upon, by their fellow humans; anything relating to magick and the Fey are not something that they want to be apart of their daily life and some are killed. One incident is sparking an almost all out war, between the local dwarves and humans of the area. Remus, the woodcutter and philosopher, feels that it is his duty to stop this, knowing that nothing good will ever come if a war breaks out. Elaina, a Toucher and one of his only friend feels that it is utmost importance that they try to stop this as well. This begins the story.

'Every piece of information or gossip he had managed to collect from travelers or from old lore had been inscribed. For millennia, mankind had spread across Glenryth, surrounded by the unexplainable wild. Why was so much unresearched? It was known that there were others, sorcerous forces at work beyond men, different species of Fey such as dwarves, elves and various beasts, had been identified. But no one pried. It was probably common sense. Remus had, however, heard of men and women who tried to explore the outside world beyond roads and pilgrim paths...Mostly they met bad ends.'

Great introduction, to a new world, with separate societies of people, living side by side and how easily conflict arises. Remus is an interesting character, with not a lot of background information and his relationship with Elaina is strange but works. Can't wait to read the next one!

Steel, Magick, and Faith ( Book 1 of The Remus Rothwyn Chronicles) by T.P. Grish

An intriguing tale that can hold anyone attention thru out the whole book.
I am a big fan of The Lord of the Ring so this story came close, but with a different feel to it. I enjoyed this book and look forward to the reading the next one in the series.
Remus is a hermit and a scholar is a bit awkward around people, but long for the truth. Elaina is one of the Touched and is able to use the wind and water to aid her in her magic.
They are outcasts and not welcomed in the High Peaks, but feels close to each other.
There was a moral to this story that being different is not always a bad thing.
Mr.Grish challenge your mind and your morals in this story. This was a very good read..

This book was gifted to me by the author (through the Goodreads) in exchange for my honest review. (LoP) The opinions that I express are my own and no money was provided for it.

You have subscribed to alerts for T.P. Grish.

You have been added to T.P. Grish's favorite list.

You can also sign-up to receive email notifications whenever T.P. Grish releases a new book.