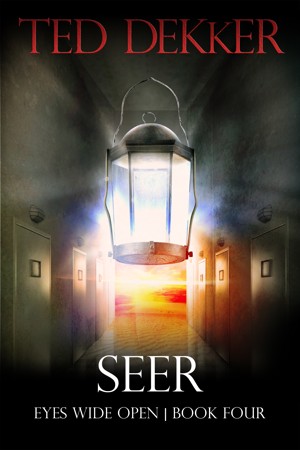 1. As an episodic story. Read Eyes Wide Open as four shorter sequential "episodes" much like your favorite TV show. The ride starts with IDENTITY which is FREE in ebooks. Think of it as the pilot, offered free. If you like the story, continue with MIRRORS, UNSEEN and the grand finale, SEER. Begin the story for FREE now. Or...

2. As a single, novel length eBook. Don't want to read four episodes? No problem. At any point, you can get the entire story in one digital edition that collects all four episodes into one seamless story called EYES WIDE OPEN. Or...

FROM THE BACK COVER:

My name is Christy Snow. I'm seventeen and I'm about to die.

I'm buried in a coffin under tons of concrete. No one knows where I am. My heart sounds like a monster with clobber feet, running straight toward me. I'm lying on my back, soaked with sweat from the hair on my head to the soles of my feet. My hands and feet won't stop shaking.

My name is Christy Snow. I'm seventeen. I'm about to die.

So who are you?

In a return to the kind of storytelling that made Black, Showdown and Three unforgettable, Ted Dekker drags that question into the light with this modern day parable about how we see ourselves.

Humming with intensity and blindsided twists, Eyes Wide Open is raw adrenaline from the first page to the last pure escapism packed with inescapable truth. Not all is as it seems. Or is it? Strap yourself in for the ride of your life. Literally. (Young Adult)

Dekker was born in the jungles of Indonesia, amongst cannibals who killed the parents of several of his friends when he was a child. Undeterred his parents befriended the people and made their home with them.

Separated from his parents at age 6 to attend a coastal school for a few months at a time, Dekker describes his early life in a culture to which he was ultimately a stranger as both fascinating and at times lonely. It is this unique upbringing that forced him to rely on his own imagination to create a world in which he belonged.

Now, many years after the publication of his first story, his novels have sold roughly 8 million copies worldwide. Two of his novels, Thr3e and House, have been made into movies with more in production. Dekker resides in Austin with his wife Lee Ann and their children.

You have subscribed to alerts for Ted Dekker.

You have been added to Ted Dekker's favorite list.

You can also sign-up to receive email notifications whenever Ted Dekker releases a new book.