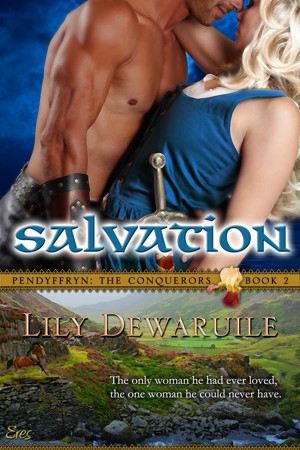 While Han Chadzy takes his revenge on Daran Pendyffryn’s allies to the east, destroying the village and driving inhabitants to the forest, Maides recognizes the first stirrings of desire he has felt since landing on this cold island.

On the chance of finding the flaxen-haired woman again and the opportunity to grasp the mineral-rich mountains surrounding Cwmdu, Maides accepts Daran Pendyffryn’s commission to find and protect Heilyn ap Alun, a boy who will become the most powerful man in the region.

The custom of offering a guest his wife for a night’s companionship is a matter of honor for Alun Cwmdu but he refuses to offend the Demon by offering Heilyn’s mother, a harridan whose sarcasm provokes men to violence. Alun’s captured Saxon slave, Ingred, is another matter.

The customs of his homeland prevent Maides from accepting another’s wife and the mercenary has seen the woman he wants that night, a woman so beautiful she outshines the sun, offering her smile to a man who equals Maides in strength and power. Her scent is of the mountains and the forest, and lingers in Alun’s bed.
Available ebook formats: epub mobi lrf
First 10% Sample: lrf
Price: $3.95 USD
Buy Add to Library Give as a Gift
How gifting works
Create Widget
Tags: wales salvation celtic mercenary warriors conquest cymru rhodri mawr pendyffryn saxon invasion the conquerors
About Lily Dewaruile

Lily Dewaruile is a best-selling author of medieval Welsh fiction. Lily Dewaruile is the pen name of an American author who lived in Wales for thirty years. Her love of the Welsh language, culture and history has inspired her fiction since her first visit to Rhuthun where she heard Welsh spoken for the first time. During her time in Wales, she wrote over twenty novels, many of which are still manuscripts, awaiting their debut.

Her first Welsh Medieval novel, TRAITOR'S DAUGHTER, was published while she was living in Wales. The photograph used for the cover of this book is of one the most spectacular sunsets over the historic town of Caerfyrddin, named for the medieval poet, Myrddin (the inspiration for the fictional character, Merlin), where Lily lived for twenty-five of her thirty years in Wales.

RECONCILIATION, Book 5 of the Pendyffryn: The Conquerors. Publication date: January 23, 2014

JUSTICE, Book 1 of the Pendyffryn: The Inheritors, Publication date: October 20, 2016

MERIT, Book 2 of the Pendyffryn: The Inheritors, Publican date: November 21, 2021

More about all of Lily's independently published novels in the Pendyffryn:The Conquers and Pendyffryn:The Inheritors series are on her website: lilydewaruile.com and eresbooks.com, Smashwords, as well as KDP: Amazon and most independent online booksellers.

Also in Series: Pendyffryn: The Conquerors

Reviews of Salvation: Pendyffryn: The Conquerors, Book 2 by Lily Dewaruile