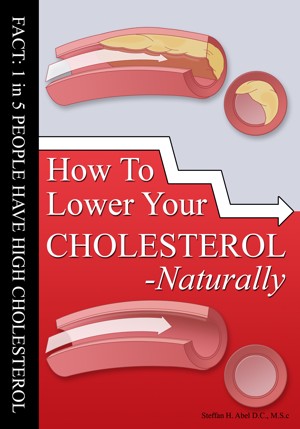 How To Lower Your Cholesterol Naturally

By Steffan Abel
"How To Lower Your Cholesterol - Naturally" will show you how to lower your bad cholesterol and raise your good cholesterol - simply and effectively! All you need are a few simple supplements - which are all readily available, a few small, subtle and easy changes to the foods that you eat and you are well on your way to restoring your cholesterol levels to normal!

Dr. Steffan H. Abel D.C. graduated from the Anglo-European College of Chiropractic in 1990 and since that time has had his own successful private practice in the North East of England.

Having parents that were both teachers and lecturers led him to developing both an open and enquiring mind. Since establishing his clinic he has had a tremendous and vested interest in trying to find and combine the best healing techniques so that he could offer the ultimate treatment to his patients.

He first encountered T.B.M. over 10 years ago and was so impressed with the technique that the urge to study it and if possible develop it further arose. This culminated in development of his own technique – Integrated Healing Systems – which he continues work on to this day.

In his spare time he spends between 15 and 25 hours per week researching all areas of “alternative” and allopathic healthcare in order to bring the best advice to his patients through his practice and writing and when not working he is to be found enjoying life with his partner – whom he loves tremendously!

You have subscribed to alerts for Steffan Abel.

You have been added to Steffan Abel's favorite list.

You can also sign-up to receive email notifications whenever Steffan Abel releases a new book.