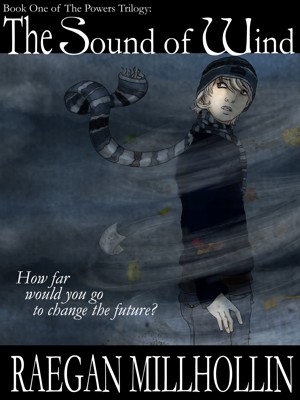 The Sound of Wind

By Raegan Millhollin
Hugo Meyers, lead singer for the Seattle indie-band, Shyshank Puppets, just found out he has super powers. That should be awesome right? Unfortunately they came with visions of a nightmarish future, and the realization that having powers not only doesn't make people any more responsible than they normally would be, sometimes it makes them a great deal worse. More
Hugo Meyers, a 22-year-old hipster who has long-since shoved all of his ambitions under his bed with a moldy pizza box and a forgotten pile of dirty clothes, knows he is not cutout to save the world, and yet, he’s started getting nightmarish visions of a fast-approaching nuclear apocalypse. Either the Powers That Be hadn’t looked at his resume, or they were stacking the deck in favor of a global catastrophe that his meager musical talents, or the ability to control the wind that had come with the visions like some sort of consolation prize, couldn’t possibly stop.

Well, it turns out nobody cares if Hugo is hero material or not. A chance encounter with the (almost) 16-year-old lightning-monster, CJ, leads him to the one man always at the center of the apocalyptic visions; the incredibly charismatic philanthropist and CEO of Gideon Enterprises, Alexander Gideon. Now he’s been dropped face-first into a cold war between people with superpowers that has been going on behind the scenes for generations. With the help of, thankfully, more competent allies, Hugo must untangle years of lies and betrayal before it’s too late for everyone. But is it all worth it, when each sacrifice Hugo makes trying to save the world brings him one step closer to becoming the type of detached, calculating monster that would want to destroy it?
Download: epub mobi (Kindle) pdf more Online Reader
rtf lrf pdb txt
Price: Free! USD
Add to Library
Create Widget
Tags: romance super powers precognition drama action unlikely hero world annihilation emotional trauma emotional breakdown powers abilities heroes who cheat heroes and villains emo boy emotional characterization

You have subscribed to alerts for Raegan Millhollin.

You have been added to Raegan Millhollin's favorite list.

You can also sign-up to receive email notifications whenever Raegan Millhollin releases a new book.