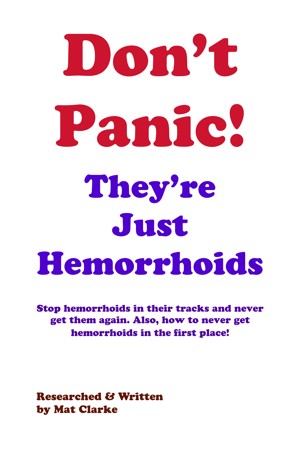 The concise details are specific in the ways to cure yourself of hemorrhoids and is written in the most simplistic way possible so anyone can follow the guidelines.

Step-by-step instructions on the easiest, most simple, natural and best way to cure hemorrhoids.

*Please note, this booklet does not follow the day-to-day activities of a hemorrhoid sufferer. You'll instead be following a factual guideline that will rid you of hemorrhoids for good.

Never fear, I have researched this ailment extensively so that I can inform you on what exactly is going on down there, and give you the knowledge you need to make an educated decision on what you should do about it straight away. You’ll also discover that having inflamed hemorrhoids is not the end of the world. In fact you’ll live a completely regular life. You just need to know what to do.

“A great little book with straight forward information and helpful tips on what to do about a sometimes embarrassing condition.”
Brad Corbett
Osteopath, Sydney, Australia
bodiesinbalance.com.au

From an early age, Mat has used a keyboard as his instrument of expression. His range is broad, from the chilling, to the obscure, to fan fiction, to thought provoking, to children’s and YA, and a not too small amount of speculative fiction. Yet, his main area of interest always comes back to the thriller genre.

Check out this page for more free stories and writing competitions: www.worldwriterscollective.com

You may have seen him tapping away in a cafe, bar, on the train, in a plane, in Melbourne, Sydney, Sunshine Coast, New York, Washington DC, Chicago, and the list goes on. This is where he gets his ideas, from you, the streets, and what goes on around the world.

Non-fiction work has mostly been inspired by health issues affecting friends and family, as well as the rest of the world, and to make solutions readily acceptable to the public, especially when the ailment is embarrassing.

Letter writing has also been a heavy contributor to Mat’s skills, whether it be to government bodies or a company, either to request information on a current associated issue or to offer a solution to an ongoing problem with (if a local government) traffic, public transport, spending, banks, etc. And (if a company) an idea for the product so that it could become better accepted by consumers, or in some cases, healthier for consumers.

With a few novels completed, a couple of health booklets, a writing games book, a board game, as well as children’s stories, young adult, and a multitude of short stories, you can expect to see a lot more work by Mat Clarke in the short term as well as the long term.

In Mat’s spare time, he is an actor, builds hand-made furniture, and is an entrepreneur within multiple fields. He enjoys bush walking, hiking, camping, but also loves big cities; New York being his favourite. He is a movie buff, and also loves good pizza.

You have subscribed to alerts for Mat Clarke.

You have been added to Mat Clarke's favorite list.

You can also sign-up to receive email notifications whenever Mat Clarke releases a new book.