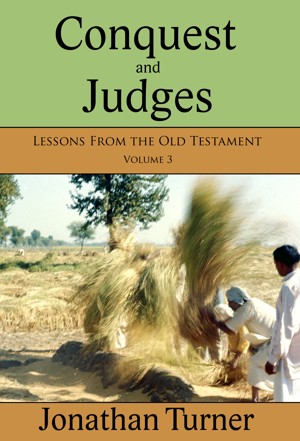 Each lesson emphasizes principles which are relevant to life today. Examples of applications are: making and keeping vows, overcoming the past, overcoming bitterness and restoring a relationship with God.

In addition to the lessons, Mr. Turner includes an essay on the nature of God. In it he explains how a loving God can also command things like genocide.

Other books in this series deal with different periods of Old Testament history. Titles include: Beginnings and Patriarchs, Exodus and Wanderings, The United Monarchy.

Jonathan Turner grew up in Pakistan where his parents served as church planters. He came to his own faith in Christ through their influence and example.
After returning to the United States, Jonathan served in the church as a bi-vocational youth minister for five years. Since then he has taught numerous youth and adult classes.
In 2006 Jonathan and his wife helped plant a new congregation. In addition to his speaking and teaching, the congregation selected Jonathan to serve as one of its Elders.
Currently, Jonathan is concentrating on writing. So far, most of his books have been non-fiction – study guides and curriculum. However, he is also starting to branch out into short stories and novels.
In addition to writing and teaching, Jonathan is actively involved in carrying on the mission work his parents began. Part of that work includes speaking and teaching in the congregations his parents began.
Jonathan and his wife have been happily married for over 30 years. They live in Oregon and have two grown children who are also in the Lord.

Also in Series: Lessons From the Old Testament

You have subscribed to alerts for Jonathan Turner.

You have been added to Jonathan Turner's favorite list.

You can also sign-up to receive email notifications whenever Jonathan Turner releases a new book.