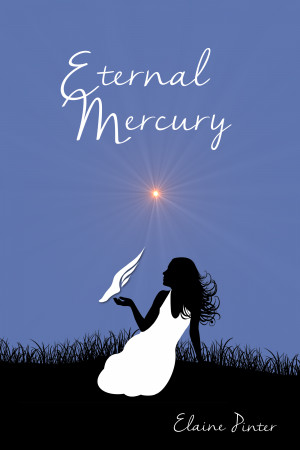 Chelsee Taylor has been in love with her boyfriend, Max, since they started kindergarten together. She has no idea that high school graduation will be the last perfect day of her life. After a tragic car accident, she refuses to accept Max's death because she can still feel his presence. No one believes her and she is completely alone. But all of that changes the moment she meets Blake Andersen. It's not just that he believes her . . . or even just that he's so understanding . . . but why is Max's presence so strong when she's with Blake?

Elaine Pinter was loaned a book while her son was recovering from ear surgery. Not only did she rediscover her love of reading, but she also found that her emotions could bring her own ideas to life. As her son grew stronger, so did the story of Eternal Mercury.

She lives in Idaho with her husband and son (who made an amazing recovery). When she’s not hanging out with them, she’s working on her latest project, From the Water Tower.

In Boise Idaho, a young man's 'flu turns suddenly serious, and friends and family grieve. A life of doing just what he wants seems meaningless and wasted now it might all end. But what if there's more to life than fun, and more to memories than just recollections of the past? And what if true love endures in more than just the hearts of the living?

Told in the voices of two very different protagonists, Eternal Mercury invites readers into a grieving girl's heart, gradually expanding her horizons to include a community wounded by tragedy. The twin stories of recovery from grief and folly feel compellingly real, lightened by love and deepened with some very practical and generous considerations. Some beautiful scenes set in a hospital children's ward will linger long after the tale is done.

"It's amazing how fate [gives] you exactly what you need at just the right moment," muses one character, as decisions are made and life goes on. This teen love story holds much more than just teen angst and romance. Inviting readers to ponder life death and love in new and deeper ways, it just might compel you to fill in that organ donation card too. Meanwhile "Trust fate, live life, finish well," is a pretty good motto to grow by.

Disclosure: I won a copy in a blog hop and I offer my honest review

This novel definitely takes you through an emotional wringer. It didn’t just bring tears to my eyes, but actually made me cry, repeatedly. Pinter tackled some very tough topics in a very tactful yet approachable manner that lets you really see them for what they are. When all is said and done I want to say that I couldn’t put this novel down, but that isn’t entirely true. I read part 1, Chelsea’s story, in a single sitting and was so emotionally wrung out that I had to force myself to put it down. That didn’t last long, however, and then I was diving headlong into part 2, which I again couldn’t put down. If Chelsea’s story broke my heart, Blake’s shattered it and then put the pieces back together again. This was such a bitter-sweet story that you can’t help but for the characters.

Pinter allows such realism to shine through her story that you can’t help but feel connected to it. The contrast between the two parts is phenomenal and highlights how different two sides of a coin can be. The author paints brilliant images with her descriptions. I quite enjoyed how she replayed the same scenes from each character’s perspective. The differences in their views really shines through in the minute differences in the way that they see the world around them. By melding their two lives into a single story Pinter really develops the world around these characters. There was also a seamless overlap between the two parts of the story. There were no discrepancies (other than differences in the characters’ perspectives).

The characters in this novel were also brilliant. The main characters were fantastically developed. Because the reader gets to know them as they get to know each other they are developed in a natural manner. They also grow and change into more mature individuals throughout the course of the stories, in conjunction with the issues that they must overcome and recover from. These two characters are complete opposites yet perfect for each other. The supporting cast rounds out this novel well. Through Pinter’s development you can really see how they are a family, whether or not they are related by blood.

Overall, this novel made me really think about how life can change so completely in the blink of an eye. It was an amazing, life altering story. Even though it was bitter-sweet, I wouldn’t hesitate to recommend it to anyone, and I am dying to read more from this brilliant author.

(reviewed 50 days after purchase)
J Brady reviewed on Feb. 6, 2013
(no rating)
A triumphant story about the victory of love and life over death and tragedy.

The sheer joy of life and the simple pleasures we share with family, friends and home in this celebration of life well lived is a delightful and moving experience.

So, grab a Jud's burger, a box of tissues and ENJOY!

You have subscribed to Smashwords Alerts new release notifications for Elaine Pinter.

You have been added to Elaine Pinter's favorite list.

You can also sign-up to receive email notifications whenever Elaine Pinter releases a new book.