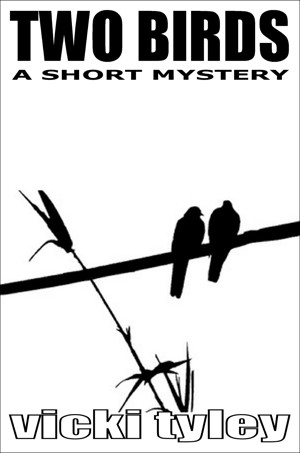 Rated 4.63/5 based on 8 reviews
A short mystery from the bestselling author of THIN BLOOD.

Kristine Abbey lies unconscious and bleeding on her kitchen floor. Crouched next to her with his hands clamped over the knife wound in her abdomen, her husband, Daniel, screams at the couple’s sister-in-law – and his ex-mistress – rooted in the doorway. Time slips away…

Based in rural Victoria, Australia, I write fast-paced mystery and suspense novels in contemporary Australian settings.

My other interests include photography and web design.

I love to hear from readers: vickityley@gmail.com

Two Birds is a clever and well told short story which kept me intrigued right up to the very end.

I loved the story,nicely done the pace and layout of the story is spot on.
Can't say much more without giving something away.

A very good, short murder mystery. The story is short and direct. The few characters are well developed. The ending is completely logical, and still a surprise.

Vicki's short story is as great as her full length book stories. I am amazed at how much information a short story can provide with such vital information which made me unable to guess who the perp was.

Ms. Tyley did a great job and made her characters descriptions vivid from the very first page to the last page. I was hooked instantly and didn't guess who commited this crime until the very end of the story.

I recommend Two Birds (A Short Mystery) by Vicki Tyley

Loved it! Quick read while waiting for rain to stop!

It's disarmingly short, because you've included a lot of material after the story itself. So, because the end came for me on page 16 out of 27, it seemed like a bit of an anticlimax, because I was expecting these characters to get developed more.

But in general, this is competent: it kept me moving through it. There are too many loose ends, however, to give it the fifth star.

One problem is his bloody clothes: you repeatedly mention that he's covered in blood (as is Leah) but they sit in the hospital waiting room, with other people, for some length of time like that. Nobody's going to stand around in wet, bloody clothes, and they certainly won't sit on chairs. This can be fairly easily rectified: the cops can show up right away, or the hospital people can insist they change and put on scrubs or whatever.

A more problematic issue is the lack of characterization of Daniel. His reactions are all over the place and his motivations unclear. He seems awfully sad about his wife's death for someone who killed her. And why did he kill her? Why not just leave her for the other woman, if all Kristine does is criticize him? If there's some other reason to kill her (e.g., insurance money), then adding that might help explain things. There's nothing except "he's a douche" to explain his murdering his wife. And yes, he may be a douche, but the story will be stronger if you can make it clearer how and especially why he's one.

You have subscribed to alerts for Vicki Tyley.

You have been added to Vicki Tyley's favorite list.

You can also sign-up to receive email notifications whenever Vicki Tyley releases a new book.