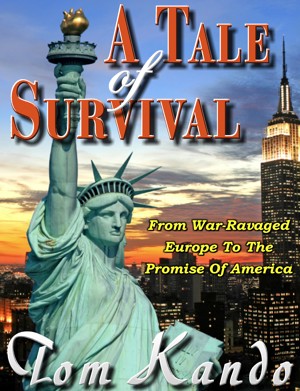 A Tale of Survival: From War-Ravaged Europe to the Promise of America

By Tom Kando
Rated 5.00/5 based on 3 reviews
This is the hair-raising story of a kid growing up in WWII Hungary, and an odyssey afterwards through America. It's an intelligent work, with a great sense of humor. Tom touches on many uncomfortable and realistic themes - adultery, sexuality, poverty, brutality. He is audacious, powerful and honest. His book is a personalized narrative of 20th century history, based on his life. More
Tom Kando is born at the epicenter of the world’s greatest war. In Hungary, his family survives the holocaust, the nazi and soviet occupations, the bombs, the genocide, and starvation. They escape from Budapest to Paris, living in abject poverty as war refugees. The boy roams the streets, subways and slums, encountering violence and dangerous people. Tom and his family keep moving, gypsy-like, from country to country, hitch-hiking and sleeping on public benches and beaches. At 14, his family settles in Amsterdam, where Tom grows up at risk.

At eighteen, he earns the $50 fare for a one-way ticket to New York, and ten days later he arrives in New York City, not knowing a single soul in the new world. Surviving life-threatening situations, he focuses his drive to receive a fulbright scholarship to one of the country’s finest universities. Soon he learns what the american way of life is all about, the generosity and courage of the american people, the sports, the parties, the hard work, and the competitive spirit. For the first time in his life, he becomes a citizen - a citizen of the most powerful country in the world. After decades of refugee status and discrimination, he becomes an American. He finally belongs somewhere.

After completing his undergraduate studies at the University of Amsterdam, he pursues and receives a master’s and a PHD at the University of Minnesota. At 27, he is an Assistant Professor. He spends the following decades teaching at major universities as well as in prisons and for the air force, doing research on criminology, mental illness and human sexuality, and traveling to Japan, Korea, Asia, Africa, Russia and dozens of other countries. As his life unfolds, Kando sees his own experiences mirrored in the history of the times, with all of its stormy, sometimes murderous, sometimes joyous explosions. He actively participates in the turbulent counterculture, the peace movement and the civil rights movement, at times risking a great deal.

Over the course of an eventful life, Kando befriends major figures - at conferences and on the street. These range from Eldridge Cleaver and the Reverend Ralph Abernathy to world-famous football coaches, from famous rock stars to Hungarian President Arpad Goncz and members of President Reagan’s cabinet.

Tom marries and has an idyllic family life. He takes his wife, his children, and in time his grandchildren on exciting trips from Hawaiian volcanoes to the Australian outback, from Norwegian fjords to denali in Alaska, from the Roman Colosseum to the outer Hebrides Islands.
While solidly settled in America, he remains a citizen of the world. He returns to Europe frequently, and feels at home in half a dozen countries.

Sometimes, his European friends confront him with what they see as growing flaws in American society. When this happens, Tom does not shirk his intellectual responsibilities. While deeply progressive at heart and concerned about emerging dysfunctions in his adoptive land, he can never forget what America has given to him. Through perseverance and dedication, Tom prospers and grows in a country that has given him the space, the freedom, and the opportunities which enable him to keep his faith and to overcome all the challenges that 20th century history has thrown at him. This is more than the tale of one man’s life. It is a personalized story of the 20th century, complete with all of its horror and all of its promise. It is a Horatio Alger narrative based on unadulterated facts. It is the saga of an immigrant to the Promised Land.

Tom Kando, PhD, grew up in WWII Europe, spending his formative years in Paris and Amsterdam. At eighteen he came to America as a lonely immigrant and a Fulbright student. He became a professor at major universities, taught in prisons and lectured worldwide. His memoir, A Tale of Survival describes his far-flung and sometimes harrowing experiences .
He authored articles about crime, terrorism, psychology, sports, and travel in the Wall Street Journal, the Los Angeles Examiner and other venues, and nine books, including Leisure and Popular Culture, Social Interaction (C.V. Mosby), Sexual Behavior and Family Life (Elsevier) and Readings in Criminology (Kendall Hunt).
Tom is an avid road biker and he plays the flute. He is married to Anita and he has two daughters and two grandchildren, so far.

Reviews of A Tale of Survival: From War-Ravaged Europe to the Promise of America by Tom Kando

Memory, history, and demographics all play a role in a person’s understanding of the world. For the first years of the baby boomer generation, only a few years separate history from memory in the case of World War II. I am such an early baby boomer. Although born in California and raised during the 1950s in the greater Washington D. C. area, I never heard my dad or any of his peers (virtually all the males of which were veterans) talk about the then- recent war.
As a child, even as a young adult, World War II seemed ancient history to me: not something having an influence on my life. That is a fluke of my childhood memory. To get a very different perspective on memory and history of the war, you can’t do better than to read, A Tale of Survival: From War-Ravaged Europe To The Promise of America by Tom Kando.
Tom was born in Hungary in 1941. As such his earliest memories occurred right in the middle of the conflict. He and his family experienced German and Russian invasions before fleeing to France. Thus Tom spent the 1950s in post-war-torn France (a far cry from my suburban D.C. world). Tom later moved to Holland before coming alone to this country as a Fulbright Scholar.
Kando has had an amazing life according to his book which straddles the line between memoir and historical fiction. Whether true or imagined, the first portion of the book does an amazing job of bringing to light the sensibilities of a bright child in that time and place. Kando shows how a young boy idealized his beautiful and talented parents, how he resented his younger siblings, and how a child experienced the reality of foreign soldiers occupying his home (not just his country). I’d never thought about the difficulties of growing up in Europe right after the war. Kando does a wonderful job of revealing events though the eyes of a gifted and insightful child.
The story continues in America during the 1960s nearly to the present. Perhaps because some of that time and place is familiar territory, I found it less compelling. But, for me, the insight into Europe during and after the war seen by someone fairly close to my age was priceless.

I just reviewed my review of Tom Kando’s A Tale of Survival and was surprised to see that I had inadvertently failed to submit a star-rating. Tom has written a terrific book. In an often humorous way, he touches upon a variety of sensitive topics, is both insightful and factual, and tells a story that is both inspiring and entertaining. I enjoyed it from beginning to end. I happily give it a 5-Star rating!

(reviewed 8 days after purchase)
Ernest Olson reviewed on Feb. 14, 2013
(no rating)
Dr. Tom Kando tells a tale that is at times disquieting, but one that is always entertaining, and ultimately inspiring…and it is a story that is more fact than fiction. As is often done by any good author, he does take some literary license, as revealed by the 9 “fibs” identified in the preface; nonetheless, the bulk of the story is an honest portrayal of his life and times, of challenges met and obstacles overcome. Born in war torn Europe, Tom’s early life was one of privation and hardship, but this did not stop him from pursuing his love for learning nor his desire to study in the United States. Eventually, through grit, persistence, and a bit of luck he follows a harrowing, sometimes rowdy and always challenging path that ultimately leads to a Ph.D. and a career in academia. Having been branded a refugee from childhood, he also realizes the dream of becoming a citizen of his adopted country.

Tom is not afraid to explore important cultural themes through the microscope of his own personal experience. Sexuality, racism, jingoism, politics, marriage, patriotism, and religion are all touched upon. Nor is Tom afraid to expose the dark-side of academia, revealing that the halls of the academia are often more hollow than hallowed. Some of the incidents and encounters are filled with pathos, many with a touch of humor, but all are subtle lessons.

Throughout the book, the professor shines through in the form of snippets of insight and wisdom. For example, in explaining why people immigrate to the United States, he has this say:

"…it was an escape from the cobwebs of cultures that hold onto subtle and not so subtle forms of traditional hierarchy, discrimination and disrespect, cultures which demand conformity and can be oppressive to the free-spirit, to the ambitious, to the individualist…. For such people, America is the promised-land because, to a large extent, America was created by such people. America is especially attractive to people with initiative, people who don’t fit the mold, people who don’t belong, in one word - individualists."

In those few words he captures the essence of traditional “American” society, and sets the stage for later social psychological discussions that are cleverly intertwined within the storyline.

This is a delightful, gripping, and insightful book. It captures your interest in the first few paragraphs and holds your attention to the very last. In the end, it leaves you feeling privileged to have had a no-holds-barred look into the life and times of a most interesting and courageous individual, and it reminds you that no matter how tumultuous the present there is always hope for a better future.

Ernie Olson
Just a guy who likes to write and draw, and enjoy a good book.

A Tale of Survival by Tom Kando is the passionately written saga of an boy immigrant to the promised land of America. While the book is entertaining as an adventure story, it is also, and perhaps more importantly, a detailed and accurate account of history from the second world war to the present day. I enjoyed reading it from cover to cover and learned so much from it, I couldn't put it down.

You have subscribed to Smashwords Alerts new release notifications for Tom Kando.

You have been added to Tom Kando's favorite list.

You can also sign-up to receive email notifications whenever Tom Kando releases a new book.