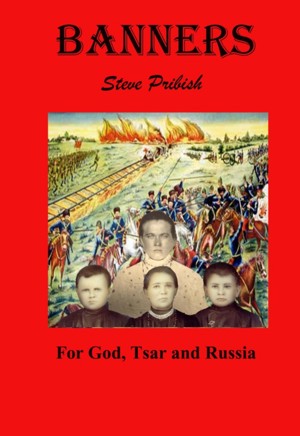 Steve Pribish was born in Joliet, Illinois of Russian immigrants and learned stories of "years ago" first hand from his father and grandfather. After college, Steve spent thirty-three years working for the United States government monitoring the Soviet Union. He was deeply involved in Russian culture and made prolonged trips into European Russia.

Steve's novels are the result of several generations of experience. He is the author of over two hundred government reports and has written for "Home and Away" and "Videomaker" magazines, and several Midwestern newspapers. His short story, "There Will Be Crosses" won first place in the Dayton Daily News Short Story Contest in 1997, and "The MiG and I" won first place for personal stories in the Sinclair College short story contest.

Banners: For God, Tsar and Russia
An assassination in Serbia sets off a series of events that draws the world into an ever-expanding vortex of madness. As mighty armies clash, entire populations must either flee their ancestral homes or be ground into dust. Akulina Boriskova and her two young sons are caught in the center of the madness and with the other villagers of Hutawa, Byelorussia must choose between death or Siberia.

You have subscribed to alerts for Steve Pribish.

You have been added to Steve Pribish's favorite list.

You can also sign-up to receive email notifications whenever Steve Pribish releases a new book.