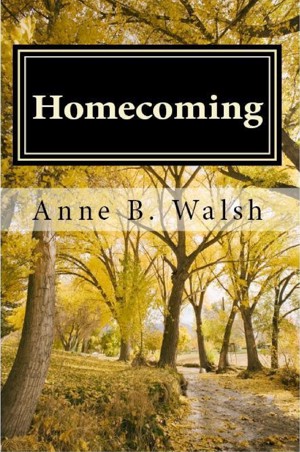 By Anne B. Walsh
Rated 4.00/5 based on 2 reviews
For this Cinderella, midnight is only the beginning... Is a life of luxury always preferable to one of hard work? What if one comes with loneliness and the other with love? Avani of Shroca, once a servant girl, now a lady in a land of magic, must answer these questions for herself, if she is ever to earn her happy ending and win herself a true Homecoming. More
For this Cinderella, midnight is only the beginning...
Avani of Shroca has never danced at a ball. Her world is her bad-tempered cousins' kitchen, and her only pleasure her escapes to the nearby forest, though she must be back by midnight. One night near the beginning of autumn, she overstays her time, and her world changes.
Overnight, Vani is transformed from a cinderwench to a Duke's pampered daughter, courted by the King of Anosir himself. Her only worry now should be the far-off unrest of the kingdom's non-human races. But as she knows, what should be, is not always.
Though Vani makes friends among the young nobles, her truest help comes from her teachers in music and magic, a palace cook, and a storytelling woodcarver. What will she do when the King's laws threaten her mentors?
Vani's destiny seems determined to give her the fairy-tale ending she doesn't want. Will she be able to trick her fate into allowing her a true Homecoming?

Vani is a charming, innocent, and lovely young lady who is destined to be the wife of the king. Oh, and she was also kidnapped as an infant and raised as a slave in a world of magic. She has much to learn in a short time before she is introduced at court and she needs the strength and talents of her friends and family to succeed as well as to discover where her heart lies.

Vani's naïveté and her sheltered upbringing provide a nice balance to her determination and abilities which makes the story plausible. She is a very endearing character and I found myself wanting to be able to help her achieve her fortune. The other characters are also very carefully detailed, whether tyrannical or nurturing. While the story does contain many characters, they all serve a purpose to the plot.

I would recommend this story for teens and above; the length of the text as well as the reading level may be above the ability of younger readers. It did take longer than usual to immerse myself in the plot--the first three chapters lay a lot of groundwork that appears unconnected--which is why I give it only four stars. I look forward to more books in this series.

I really liked the book a lot, I love the writing style and the attention to detail regarding the description of the worlds Anne Walsh's stories play out in.
A also like her characters, they have each and every one their own defining characteristics and little quirks. They are at the same time general enough to give everyone a little part of him/herself to identify with and get into the story, but they are detailed enough to create the feeling of getting to know real people while reading the book. I also like the recurring theme in her books about tolerance and caution towards generalisations and early judgement about people you did not really experience for yourself.
There is only one thing that bugs me about the book. I have to say that I come from reading Anne Walsh's fanfiction since... wow, 6 years and also "Homecoming" (which I also liked a lot by the way, despite forgetting to review it). And while I like having the setting of a family group and enjoy the play of characters of each other, I find that it can be a bit confusing and also sometimes annoying to have seemingly the same characters in the different novels. You always see the DV characters shine through, which apparently is also planned, but for someone who reads several of your works it makes it hard to distinguish the unique differences in the stories. You don not get to know new characters but see them disguise themselves into new plots. Which is kinda surprising, because in the fanfiction it was the other way around: The characters were known from the start, but if you compare them to their canon counterparts you can see the connection but despite that you have the feeling to get to know a new world, a new set of people. Which is why it is so good, because it is not just a weak mirror image, but has a life on it's own. So I think it is kind of sad, that despite having that potential in this book (because she is a great writer) there is that just-a-little-too-close mirroring of the Dangerverse.
Just to end this review on a positive note: Despite this huge chunk of (hopefully constructive) criticism I really enjoyed the book. I love the idea of the three kinds of people and the world it painted in my head. Jay!