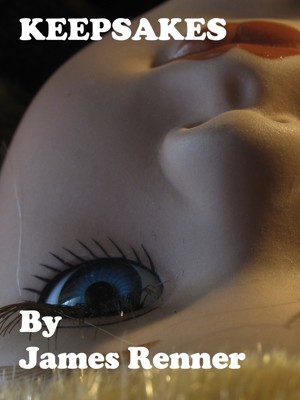 By James Renner
A hoarder is forced to come to terms with the disappearance of her husband by finding something, anything to throw away.
Download: epub mobi (Kindle) pdf more Online Reader
rtf lrf pdb txt
Price: Free! USD
Add to Library
Create Widget
Tags: horror literary hoarding
About James Renner

James Renner is a reformed muckraker who now writes novels and short fiction. He also occasionally dabbles in film and comedy.

At Kent State, Renner founded Last Call Cleveland, a sketch comedy group, along with Mike Polk, Chad Zumock, Aaron McBride, and Jef Etters. For a time, they were the most-watched late-night television program in the dorms–take that Conan!

Renner was once voted one of Cleveland’s Most Interesting People by Cleveland Magazine. It was between him and the Norton Furniture Guy. The editors have come to regret that decision.

In 2005, Renner directed a short film based on the Stephen King story, All That You Love Will Be Carried Away. King sold him the rights for $1. It starred Joe Bob Briggs and the late-great Harvey Pekar. And it premiered at the Montreal World Film Festival.

Renner spends his spare time hunting serial killers and writing about his adventures. One of his true crime stories was published in the Best American Crime Reporting anthology. It was the first nonfiction true crime article to use a dream sequence as a narrative device.

Sometimes Renner pretends to smoke cigarettes because he wants to feel relaxed but is too afraid of the harmful effects to actually light it.

Renner has recently signed a two-book deal with Sarah Crichton Books, an imprint of Farrar, Straus and Giroux, for a couple of novels: The Man from Primrose Lane (Feb 28, 2012) and The Great Forgetting.

Reviews of Keepsakes by James Renner

Review
Renetta reviewed on May 13, 2013
(no rating)
Love the ending! After reading this I definitely see that I have hoarding tendencies, but come on, as soon as you throw something away that you've had since childhood and never look at, you need it within a weeks time! Okay, that was half joke and all truth. I am happy to report that you can see all of my floors and the tops of my tables. I do understand the desire and the rationality, or irrationality rather, involved in hoarding. I could relate to what she was feeling. I do however have "the red room". It's the one room I've dedicated to toss things in and close the door. It is a small room but it would be nice to get to my sewing machine! I like to think of it as a big closet.

You have subscribed to alerts for James Renner.

You have been added to James Renner's favorite list.

You can also sign-up to receive email notifications whenever James Renner releases a new book.