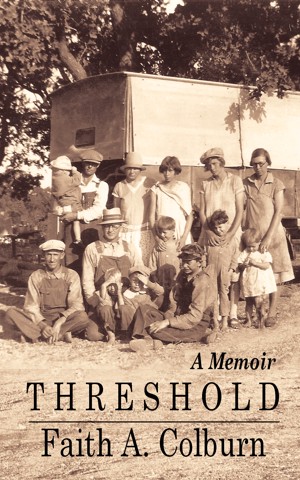 A sixth-generation Nebraskan, I'm thoroughly immersed in midgrass and shortgrass prairies. I grew up with two quirky parents and a younger sister who was as much a tomboy as I was. Mom was a retired "canary" who sang with the big bands around the Great Lakes and up and down the Eastern Seaboard and my father was a farmer. With my grandmother, I've walked the grasslands, smelling tiny onion blossoms so sweet they'll make your ears ring and watching pronuba moths fall like petals from the waxy, white blossoms of yucca. As a public information officer for the state Game and Parks Commission, I've canoed the Dismal, ridden the Sandhills with dog trainers, cross country skied the Missouri bluffs, seined carp, fixed nets, picked trout eggs, and camped out along Bone Creek. I've had the opportunity to photograph wildlife, from Sandhill cranes to elk and buffalo and, having lived my entire life here, I gained intimate knowledge of the landscape that often appears as a character/catalyst in my work.

I earned a master's degree in creative writing from the University of Nebraska at Kearney as well as a bachelor's degree in journalism and political science and a master's degree in journalism from the University of Nebraska-Lincoln. I received UNK's Outstanding Work in Fiction Award during its 2009 student conference and several awards from the Nebraska Federation of Press Women. My fiction has appeared in KINESIS and THE PLATE VALLEY REVIEW, and my poetry has been published in THE REYNOLDS REVIEW. While at the Nebraska Game and Parks Commission, I wrote numerous articles for NEBRASKAland magazine, including a cenntenial history of game and fish management in Nebraska entitled SPORTSMAN'S SCRAPBOOK.

I spent several years gathering oral family histories and biographies, including a 100-year memoir of the Lincoln newspaper publishing family, with an emphasis on their use of production technology and a farm family in western Nebraska that amassed 10,000 acres of land over several generations in drought-prone high plains region. I also spent five years telling the stories of people with developmental disabilities.

Learn more about Faith A. Colburn

I have not completed Threshhold: A Memoir, but I am impressed with the first 30 pages, and will finish it, soon. The author reported leaving her first job because the publisher wanted her to write the way he wanted rather than the way she did. This is the bane of writing for publication, those whose ego sees only how they write, and the denial of freedom to other writers.

This is exactly what I like about Threshold: A memoir. It is unique, creative and surprising because of its true and impressionistic quality. If readers are not too brainwashed to recognize the advantages of this story--the style, truth, and identity it is written--they are the losers. We need more variety in what we are offered to read and view. Threshold: A memoir is a fresh example of what is lovely about the book.

You have subscribed to alerts for Faith A. Colburn.

You have been added to Faith A. Colburn's favorite list.

You can also sign-up to receive email notifications whenever Faith A. Colburn releases a new book.