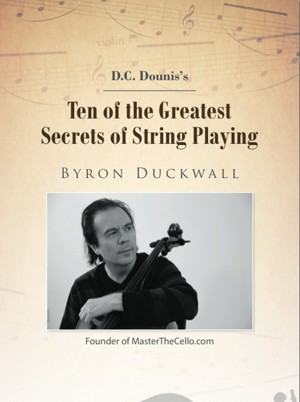 Ten of the Greatest Secrets of String Playing

By Byron Duckwall
Anyone interested in the secrets how to play cello, violin or viola will reap great rewards from the world's greatest string teacher, DC Dounis. Author and Dounis expert Byron Duckwall says,"If you want to unleash your expression, have a great vibrato, a ringing tone and effortless bowing technique, then these logical principles are your answer." This book is designed for all levels. More
This book contains information about how you can begin your journey to become a great string player. This method is about making a quantum leap in your playing by replacing your conditioned reflexes with your native instincts. It is about going from tight to loose and making difficult things seem easy. This method won't help you improve your current technique. Instead, it's about instantly discovering a completely different technique and approach to your instrument. It’s about producing a ringing tone that is uniquely identifiable and unleashing your musical expression. It’s about unlocking your natural talents and leaving your limitations behind.
Most string players have identified problems with their playing, whether that's I’m too double jointed or I always get nervous. It's more than likely, however, that your actual problems are not what you think they are. This method will help give you the ability to cut through all the fluff and see the actual problem. I call this “real focus” or “concentration.” The key is to learn how to tap into your native abilities, and this book will give you the tools to begin that journey.

I have helped countless cellists improve by applying the information contained in this book. But I don't want you to have to take my word for it–everything I present here should help you make a noticeable improvement in your own playing. If you'll grab your instrument and give the following example a try, you'll be able to see and hear what I mean.
The world-renowned teacher, D.C. Dounis, the man who developed the method I'm sharing with you here, would say, “If you feel tension anywhere in the body, it affects the sound negatively.” The reverse is also true. If you relieve tension in the body your sound will improve immediately. Test this theory on your instrument right now. Play any open string and then tense up any part of your body, even your face, jaw, or foot and listen to what happens to the sound.
The difference in your sound should be noticeable. And in this experiment, we're just talking about your foot! Imagine the improvement in your sound if your entire body was free of tension.

George Neikrug introduced me to the methods of Demetrius Dounis. Dounis had taught George for 15 years and had completely revamped his playing. Although George was talented, he wasn’t a prodigy, but after studying with Dounis, he did everything just like a prodigy. It didn’t take long to realize this was what I had been looking for.
George called Dounis the “Einstein of string playing,” and said he possessed extraordinary powers of observation. Dounis studied all the great players and observed the common denominators in their playing. Besides being a master musician, he also attained degrees in medicine and psychology, which allowed him to incorporate a sound scientific and artistic basis into his theories.
When George presented this information to me, I was stunned. I hadn't heard anything like it in all of my years of studying, and I could see the immediate difference it made in my own case. But I wasn't satisfied having found the information. I wanted to master it. I spent the next twenty plus years devoting myself to the task of mastering Dounis's teachings.
Today, I have come to realize the value of this information. It is unsurpassed by any string teaching commonly available today, and, despite its deep effectiveness, this information is not readily available anywhere, until now.
Download: epub mobi (Kindle) pdf more Online Reader
rtf lrf pdb txt
Price: Free! USD
Add to Library
Create Widget
Tags: technique method cello bach instincts performance anxiety
About Byron Duckwall

It’s not surprising after being born into a family of string players that I developed a passion for the cello. As a small boy, my father took me to study with Hans Koebel, a German cellist who was a student of Julius Klengel. While waiting for my father’s lessons to finish, I would play football on the lawn next to the music building. So by the time I was in junior high school, not only was I an accomplished cellist, but I was the leading scorer in my school’s football conference. My parents always took me regularly to hear the symphony while my grandfather would take me to Big Ten football games. Today, I am not only a concert artist, but also an avid NFL fan.
My mother Elaine, a former beauty queen and artist savant studied painting with American artist Marvin Cone who had me pose for his drawing classes as a boy. Today I participate in multimedia productions by improvising to the brilliant art images of the transcendental artist, Adi Da, as well as performing in different galleries and exhibits.
Currently I live in Minneapolis, MN where I teach both professionals and amateurs locally in person and globally via the internet. I concertize frequently performing solo recitals and concertos with orchestra in various venues both in the US and abroad.
When I am not performing, I commit my time to working on the “Master The Cello” website where I’ve collected a body of information about the methods and techniques developed by Demetrius Dounis.
The reason I was so impressed by the Dounis theories when I discovered them was because I had studied with so many famous teachers and yet the majority of the information was entirely new to me. These were logical and cohesive principles of playing derived from his observations of the common denominators of great players. They addressed the most basic elements of playing like holding the bow, drawing the bow, bow changes, vibrato, shifting, crossing strings, detache and so on.
At first, I was very skeptical and questioned everything, but I was eventually converted by the success of the methods. Again, it really shocked me that no one had ever presented this information to me before, but it is clear now, it is not part of the current orthodoxy of string playing.
Since it was obvious to me this was a gold mine for any string player who wanted to excel, I was very moved to share it. This is how the website began. My goal has been not just to collect this knowledge but to master it, which is what I have been doing over the last 20 years.
Musical Biography
Byron Duckwall began his studies with his father at age 7. I studied with many great teachers including, Joel Krosnick, Dudley Powers, Aldo Parisot, Bernard Greenhouse, Lazlo Varga, Robert Gardner, Daniel Morganstern and most notably George Neikurg. At 17, I won the Greater Chicago Youth Orchestra competition and soloed in Orchestra Hall. Soon after I won a full scholarship to the New England Conservatory. Performing the Vivaldi Double Concerto with Aldo Parisot critics praised Byron’s playing saying his "timing and resonance were exceptional.”
At age 20, Byron became faculty cellist for the Center for New Music, a Rockefeller Foundation group. I attended both Yale Graduate School of Music and San Francisco State University and has received both a bachelors and masters degree in music.
After receiving his degrees, I moved to New York City where I worked for the Metropolitan Opera Association and played in the Trio Antara under New York management. Esteemed New York Times critic Peter G. Davis wrote of their playing"...a luscious sound tempered by a sensitive feeling for the music's rhythmic lilt and subtly shifting colors."
Shortly after, Byron accepted the post of principal cellist in the Orcuestra da Estadual de Sao Paulo under Brazilian conductor Eleazar de Carvalho where I soloed on national Brazilian television.
After moving to Boston I met George Neikrug in 1987 and began studying the Dounis method. Professor Neikrug said of Byron “His playing exhibits an effortless technique and a uniquely beautiful and identifiable tone."
Currently Byron concertizes in the US and abroad. Most recently I launched the MTC “Master The Cello” website revealing the string playing secrets of D.C. Dounis.

You have subscribed to alerts for Byron Duckwall.

You have been added to Byron Duckwall's favorite list.

You can also sign-up to receive email notifications whenever Byron Duckwall releases a new book.