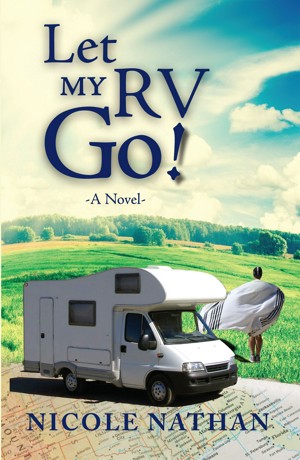 Pauline’s journal takes us onboard with the Berkovitz and Shapiro families. As their two RVs belt down the highway toward Destin, Florida, Pauline must placate the demanding and acerbic Mike Shapiro and win over Batya, Mike’s gloomy, withdrawn teenage daughter. Pauline also wants to fully appreciate unabashed Sam, her carefree husband who has attained nirvana 24/7, and Mike’s devout wife Julie, who is having a constant dialogue with God. Pursued by piles of laundry and piercing back pain, Pauline meets people en
route who help her realize that she too has wisdom to share.

Let my RV Go! is an honest, light-hearted and refreshing observation of one woman’s search for meaning—even if it requires turning her life upside down and tearing out the kitchen sink. Ever had Passover in an RV? Hop aboard and celebrate with a twist.

Nicole worked as an editor and then moved to advertising where she was a copywriter specializing in travel. Excited by the adventure and romance of this job, Nicole pictured herself roaming the world, notebook in hand.

That image was shattered when she had to write about Alaskan winters during a steamy summer while sweating in an office cubicle; and then wax about Costa Rican rainforests as icicles formed above her office window. Nicole has since developed an unusual talent for writing about places she has never visited.

Always searching for higher mountains to ascend, steeper trails to climb and increasing depths of meaning, Nicole became a trekker, mountain biker and ba’alat teshuvah. She happily embraced her spiritual renewal with Judaism and continues to learn, taking classes in Tanach and Jewish philosophy.

Looking for another challenge, she brought her family on aliyah in 2005. She envisioned being fluent in Hebrew, but soon realized the longer she lives is Israel, the worse her Hebrew gets. Nicole gave up ulpan to focus on English and now works with her husband in new media. She runs around with her laptop, hoping to find time for writing. Nicole is often seen writing in her car and on sunny park benches while waiting to pick up her kids from after-school activities.

She now lives with her husband and children in Ra’anana and spends much time in spiritual Tsfat where she is infused with Chasidut, a touch of Carlebach, plus glorious hiking and biking in the surrounding mountains.

You have subscribed to alerts for Nicole Nathan.

You have been added to Nicole Nathan's favorite list.

You can also sign-up to receive email notifications whenever Nicole Nathan releases a new book.