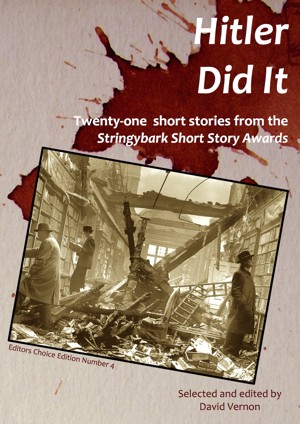 By David Vernon
Rated 4.83/5 based on 12 reviews
Here are twenty-one unique, contemporary and entertaining short stories, chosen from some of the best entries in the 'Stringybark Short Story Awards' and other clever tales that sail across the desk at 'Stringybark Stories'. Selected by David Vernon this anthology is the fourth book in the 'Stringybark Editor's Choice' series. More
Have you noticed how much can happen in fifteen minutes? You can sit with a child and complete a thirty-six piece jigsaw puzzle. You can clean a bathroom. Wash the car. The dog. Yourself, including the tri-weekly hair shampoo. Or, have a conversation that will change your life.
— from 'Fifteen Minutes' by Rebecca Raisin

“You’re running late today, Father,” Mrs Heagney observed as he stepped out of his car. “The store should have been open half an hour ago.” Mrs Doyle, standing beside her, nodded gravely in agreement.
“My apologies, ladies,” said Father Kennedy. “It’s chilly this morning and I had trouble starting the car.”
He had in fact remained in bed longer than usual keeping warm waiting for the sun to rise and bring much needed heat into the rectory. Better to employ a judicious lie now, he thought rather than invite criticism of a perceived indulgence at their expense. He could seek forgiveness later. He’d have a better chance with the Lord anyway, he thought ruefully.
— from 'Lay of the Land' by Charles E Brister

Robbie invested three weeks in pub dinners and movies before finally parking his Mini outside Olga’s flat and walking her to the door. It had taken longer than expected but there was an intensity about her that intrigued him. And sometimes she had seemed keen and then at other times there was a wall between them. But tonight he felt would be different. Wordlessly she took his hand and led him inside. As he unbuttoned Olga’s blouse, Robbie thought: “Better go easy, I’m probably the first.”
— from 'Just a Notch' by John Poole

Here are twenty-one unique, contemporary and entertaining short stories, chosen from some of the best entries in the Stringybark Short Story Awards and other clever tales that sail across the desk at Stringybark Stories. Selected by David Vernon this anthology is the fourth book in the Stringybark Editor's Choice series. Other books in the collection include: The Bridge, Between the Sheets and Yellow Pearl.
Available ebook formats: epub mobi pdf rtf lrf pdb txt html
First 15% Sample: epub mobi (Kindle) lrf more Online Reader
pdb
Price: $1.99 USD
Buy Add to Library Give as a Gift
How gifting works
Create Widget
Tags: anthology short stories hitler australia australian literature stringybark stories
About David Vernon

Reviews of Hitler Did It by David Vernon

Readers of my reviews will note that I hate grammatically incorrect work, poor layout and lousy plots. This book is perfect in all senses of the term. David Wilkinson's story which gives the anthology its title is a great yarn which leaves me feeling both fulfilled and unsettled. The sign of a fine writer.

This is a fine collection of stories. The variety of subjects covered is broad and the styles of individual authors satisfying. Stephen Atkinson's story, "Dining by Moonlight" would delight any afficianado of horror, whilst David Wilkinson's tale, "Hitler Did It," is a highly satisfying mystery story. But all these stories are well written and worth reading, again and again.

I bought this book months ago and read it from cover to cover and then forgot to review it. I found it on my bedside table and couldn't help myself. I read it all again. I think the second time around is even better than the first. The title story, "Hitler Did It" is particularly poignant. And even though I knew the ending, Julie Davies story, "The Bridge" still brought tears. This is a clever book full of quality stories. A five star read.

Stringybark does it again with this inspiring collection covering the whole gammet of human responses from tears, fears to cheers. I never on earth thought I'd ever have occasion to say this but...Hitler Did It for me! Stephen Atkinson

From the heartbreak of Julie Davies 'The Bridge' to the black humour of Stephen Atkinson’s 'Dining by Moonlight', David Vernon’s anthology has a tale for every mood. The title story by Michael Wilkinson is cleverly crafted and Charles Brister’s 'Lay of the Land' is a masterpiece. 'Hitler Did It' – another winner from Stringybark and the best $2 you’ll spend this year.

(reviewed 5 months after purchase)
Julie Davies reviewed on May 30, 2013

"Hitler Did It" captured me from its very first story: “Connecting Corridors” by Jemma van de Nes. How is it possible to read a story with a happy ending and still feel your heart has broken? Christian Cook’s “Some Corner of a Distant Field” glows with a lyrical love of the land at the beginning, so its progression is a rude shock that you keep resisting, right until the end. The whole anthology is full of delightful or devastating surprises. Nan Doyle’s “The Miracle” is a nativity story even an atheist can enjoy and I had no idea where John Poole’s “Just a Notch” was heading. His description, “Sydney’s jacaranda skies” vividly reminded this accidental migrant of the beginning of my love affair with Australia. Then it ended up in a place I learned about in the newspapers, and had tried to forget ever since. If you want marvellous stories told in powerful language, yet typically Aussie understated emotion, read this book.

(reviewed 4 months after purchase)
MickySmit reviewed on May 6, 2013

As Christine Kaluaat said in her ***** five star review below (why did she give it just one star?), this is an imaginative collection with some real gems. The eponymous story is a ripper. Yes, Christine. This is a five star book!

A fantastic book of short stories. Each story was different and they all contain some wonderful twists. The title story, "Hitler Did It" is particularly intriguing and the empathy with which the writer writes is quite extraordinary. This is a well edited collection and as an anthology deserves five stars.

Stringybark publishing is now well known for choosing authors before they become recognised. This is a fact. The judges do their job well! I've read every Stringybark anthology and have lots of favourites including now, collecting corridors from this anthology. I was hooked from the get go and I thought it was a great way to start a fantastic collection.