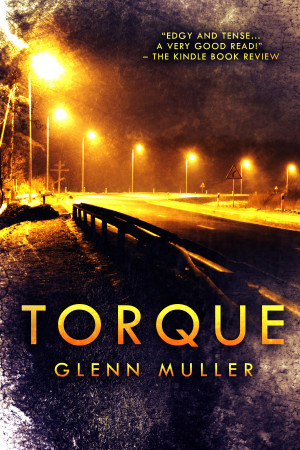 By Glenn Muller
Rated 4.50/5 based on 2 reviews
A small stolen package. A big problem. For Fenn & Lareault the next few days will be murder. Torque is the first book in this exciting mystery thriller series. Click to buy, then buckle up! More
A psychopath and a con man walk into a bar. What happens next is no joke. Their plan for a new street drug hits a snag when the formula goes missing and one of them ends up dead. So, when a small package ends up in Chas Fenn’s mailbox, he suddenly finds himself on a hit list.

The fallout gives DI Evan Lareault two strange homicides, two more possibles, and a fraudulent funeral home to deal with. Cases that appear unrelated until Fenn discovers the secret behind the package and goes on a tear looking for answers of his own.

Glenn Muller was born in New Jersey, USA, then spent his early years in England before emigrating to Canada where he would attain Canadian citizenship.

After jobs in hotel administration, driver education, computer applications, and bookkeeping, Glenn started his own successful bookkeeping business. Writing, of course, he’s always done for love, not money. Though money is always politely accepted when offered.

Chas Fenn, the protagonist in his debut novel, TORQUE, was inspired by the twelve years he spent as a driving instructor, and would appeal to fans of The Republic of Doyle. The sequel, JACKLIGHTER COPSE, was written in response to the demand for another book featuring Chas Fenn and Detective Inspector Evan Lareault. His other novel, BOOMERANG, was influenced by a life-long interest in Space exploration and would appeal to fans of Clive Cussler, Lynwood Barclay, and Michael Connelly.

Although his genre is thrillers, Glenn natural sense of humour bubbles to the surface, prompting readers to describe his books as “fun-packed” and “just plain awesome”.

Reviews of Torque by Glenn Muller

Torque starts as it means to go on by being fast paced and action packed. The beginning of the story opens with the anonymous characters playing out a scene, where one is selling a new street drug to some young men. The intriguing beginning ends in a death, but it opens up the tale for a myriad of other characters and plots.

The main character, Chas Fenn, is quite the innocent bystander, but quickly becomes embroiled in the story when his father sends him an important and dangerous package. Fenn’s resourceful, clever and completely likeable and despite his father being a con-man, he is only tainted by the association for the package that was sent to him. He is the man who can do what the cops seem to be failing to do, find links between the many plots and he gives the bad guys a hell of a time! There are a host of interesting deaths, action scenes, car chases, humour and characters that make this an entertaining read – the mysterious Brittany Reis, whose hairclip I wouldn’t won’t to be accidently poked with, Fenn’s tongue-in-cheek friends and a load of good and bad guys.

The story keeps its dramatic pace throughout and the twists and turns never stop. Even when you reach the end, there are still surprises to be had. A highly recommended read, thoroughly entertaining and very worthy of its rating.

What a great read! The plot develops quickly and the story pulls you in from the first line. I loved the characters in this novel and the main character, Chas Fenn, is unlike any other in this genre. The book is action-packed, funny and totally unpredictable. You'll love it!

You have subscribed to alerts for Glenn Muller.

You have been added to Glenn Muller's favorite list.

You can also sign-up to receive email notifications whenever Glenn Muller releases a new book.