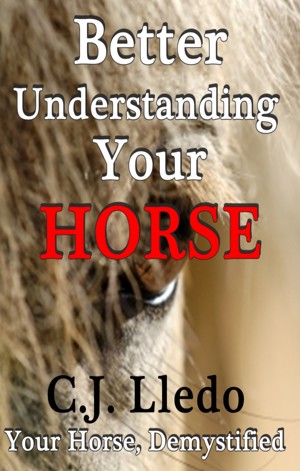 By CJ Lledo
Unlocking the mysteries surrounding your horse’s behaviour: helping you to better understand and manage it. More
Ever wished someone would hand you the manual to your horse?
No, not the one that tells you how to look after it, although this one coves aspects of horse management as well, I’m talking about the one that explains to you just why your horse does the crazy unexpected things other peoples’ horses don’t seem to do…

Well if you have, then this is it!

Better Understanding Your Horse opens up the enigmatic world of horse personalities, how they govern horses’ responses to certain events and occurrences and how best to manage them.

This book not only decodes your horse’s unique personality, it will help you to understand your horse’s behavior, how to manage your horse, also how to achieve a more harmonious relationship with your horse, whether you’re handling, riding or training it.

Some of the things you will learn from this book:
• How to establish your horse’s personality, or that of horses in your care.
• How to determine which equestrian sports are suitable for your horse, its personality, conformation and capabilities.
• What horse personalities are prone to stable vices and their management.
• Your horse’s learning style.
• What boundaries you should apply to various horses.
• What types of personalities will take advantage of (or in some cases take over from) you.
• When is the best time and place to train your horse.
• How to distinguish a hot horse from a dangerous horse.
• When something is in line with your horse’s personality and when it is a sigh of trouble.

As owners, we can only strive to understand our horses better. By better understanding our horses, our riding, training and management of them becomes less stressful.

Having respectively worn the caps of groom, instructor, trainer, stud and stable manager: CJ started her career with horses at age nine, cleaning tack in lieu for pony rides. By age twelve, she worked as a part time groom for a riding school on weekends and holidays, and was fired from a dealing yard at age seventeen for advising clients not to buy a problem horse. She then worked herself into the position of assistant manager of a Quarter Horse stud by age nineteen: And at age twenty-four, was short-listed by some of the top studs: finally accepting the position of stud manager on the biggest Friesian horse stud in the southern hemisphere: where she managed just shy of two hundred Friesians. It was during this time that her ability to profile horses became paramount.
With family life: the need to cut back on hours saw her focus more on instruction and training rather than management. Where she has since laid the foundation for numerous youngsters, both human and equine, to succeed in whatever facet of the sport they selected: and although not competitively minded, she has held numerous local, regional and national titles

You have subscribed to alerts for CJ Lledo.

You have been added to CJ Lledo's favorite list.

You can also sign-up to receive email notifications whenever CJ Lledo releases a new book.