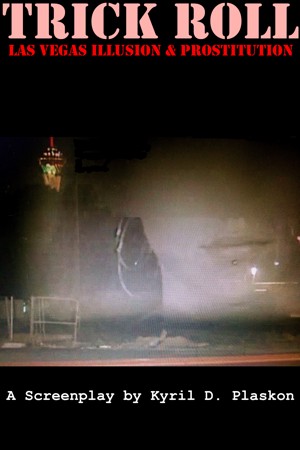 Trick Roll: The Dark Side of Las Vegas

Las Vegas is struggling to regain its former glory and maintain the illusion of a strange fantasy world. A naive TV reporter transcends space, time and topics behind the scenes of Vegas prostitution, politics, police, suicide and the TV news business. Ultimately, the public is caught in the middle of a debate that will make headlines around the world and the city is changed forever. More
Las Vegas is plummeted into an identity crisis by the economic downturn. Psychopaths, suicide, drugs in the water and an underground corrupt prostitution ring are a sober look at the reality of Vegas. The story is told through the eyes of a naive TV reporter who touches down in Las Vegas hoping to break these stories wide-open but faces powerful forces to maintain the status quo. The story uses television news to transport the reader across time, space and topics to explore the shocking underbelly of this raunchy desert city. As the city is trying to re-gain its former glory, police, politicians and prostitutes are at odds over legalizing the worlds oldest profession in Las Vegas. The public is caught in the middle. The story of manipulation and illusion of glamor leaves you wondering what is real.

Opinion on prostitution is changing. A decade ago (2002) a survey of 600 Nevadans found that 52% favored the existing legal and regulated brothels. The trend was that new arrivals to Nevada opposed legal prostitution while long-time Nevadans tend to support it.

A July 2011 Public Policy Polling survey found that 56% of Nevada voters thought that prostitution should be legal, while only 32% thought it should be illegal and 12% were not sure.

Kyril Plaskon is author of Silent Heroes of the Cold War Declassified (Stephens Press 2008) and a long-time reporter for tv, radio and print from Alaska to Chile. He began life with a dual urban-rural identity. Hailing from the mountainous rural region bordering Mexico and making daily journeys to the urban barrios of San Diego. He learned Spanish and helped start an adventure program for kids in inner city schools.

Ever since he was given the choice of what to do, he chose enterprise journalism and has been exposing abuses of power for the past 20 years. For college, he escaped the mild climate of San Diego and dove into the arctic Alaskan wilderness. He lived in a 300 square-foot cabin heated by wood that he chopped in the lonely silence of white snow and fog near a sough bordered by tall dark pines.

When it came time to choose a college internship, he shocked his professors by jumping on a plane bound for Chile where he eventually work for United Press International. He also worked for the Chilean government press office where he translated quotes sent by U.S. spies that was used to identify and conduct surveillance of persons within Chile. On that same trip, he traveled a bit and got lost for three days with only a raw potato and a power bar near a massive volcano. When he returned to that small cabin in the Alaska snow, he wrote his first book: The Last Rite.

The life of an aspiring writer is slow and painful. He enjoys painting and gardening to take his mind off the constant keys. But this is what he has always done and always wanted to do. The world of journalism has been a struggle for Kyril D. Plaskon, at times earning as little as $11,000 a year. To supplement his income he has cleaned toilets, worked in construction, renovated old houses, ran rickshaws, served food and worked as a tow truck driver. But before the age of 40 he has won some prestigious awards and has volumes of investigative articles penned for small weekly papers to international broadcast news networks.

Kyril Plaskon's journalism career took a new turn in 2005 when he tracked down the story of an obscure plane crash on a mountain outside of Las Vegas that turned out to be the greatest loss of life in the U2 project and was kept secret for nearly 40 years. After 3 years of research and weekend writing while working full time in TV news, he had the fascinating non-fiction account of CIA secrecy that changed the course of the Cold War and military flights. It is also a unique account of the trans-generational impact of war and secrecy on American families. Silent Heroes of the Cold War was published by Stephens Press in 2008.

Other works include Trick Roll, a film noir screenplay exploring a reporters helplessness in one of the biggest company towns in the world, Las Vegas. He wrote that screenplay in just one day. He has many other titles in the works and plans to publish 20-years of written archives.

Reviews of Trick Roll: The Dark Side of Las Vegas by Kyril Plaskon

You have subscribed to alerts for Kyril Plaskon.

You have been added to Kyril Plaskon's favorite list.

You can also sign-up to receive email notifications whenever Kyril Plaskon releases a new book.