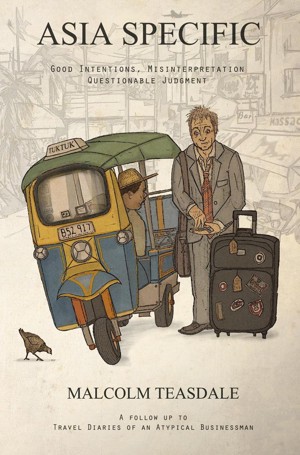 By Malcolm Teasdale
Business and leisure travel in Asia exposing the challenges when attempting to adapt to foreign cultures.
Stories include Living in SIN’gapore, Two Nights in Bangkok, Anarchy in Patong Beach, The Chiang Mai High, Wat to see in Siem Reap, The Mushroom Cloud, The Trouble with India, KOh! Samui, Ho ho ho Chi Minh, The Singha Shuffle, Very Hanoi’ing, Wild Man in Borneo, plus lots more More
Extreme business traveler Malcolm Teasdale details the case for relocating to Asia for several months and the challenges encountered while residing in the region trying to establish some credibility with the various cultures. Some repeat business trips to Asia enduring the long haul flights from North America are also documented.
Jet lag, strange food, hygiene, massage parlors, traffic congestion, local drinking establishments, eccentric locals, all played a part in making the visits to Asia extraordinary.
The stories in this book focus on the ASEAN (Association of South East Asian Nations) countries with the exception of India and include places such as Phuket, Hanoi, Kota Kinabalu, Delhi, Phnom Penh, Jakarta and Singapore.

Malcolm Teasdale was born in Coventry, England and is a successful entrepreneur who now spends his time traveling to “off-the-beaten-track” places. Spending all of his working life in the technology industry, he has made a success from creating two software development companies, the most recent of which he started in 1998 and sold to a major corporation in 2013. He created markets in all the major continents, and sold products to 8,000 + customers in over 70 countries. His company received numerous industry awards for product quality, innovation, and pioneering technology, and he has spoken at many industry events. He has traveled to over 60 countries for business and leisure, but since retiring from the industry, now travels to the more unusual destinations in the World in search of rich cultural experiences, His 3rd travel book has just been published called, “The Midlife Crisis Continues” which is about ignoring age and seeking out adventures. Think Bhutan. His previous two books “Travel Diaries of an Atypical Businessman” and “Asia Specific” focused on the quirky side of travel and the challenge of expanding his company’s reach in Asia Pacific by living in the region during periods in 2007 and 2008.
Whether it be trekking in the Himalayas or diving with Whale Sharks, there is always a new adventure to be had, and as long as he is physically and mentally able, the story will continue.
Having also lived in Canada and Singapore, he now resides in Florida.

You have subscribed to alerts for Malcolm Teasdale.

You have been added to Malcolm Teasdale's favorite list.

You can also sign-up to receive email notifications whenever Malcolm Teasdale releases a new book.