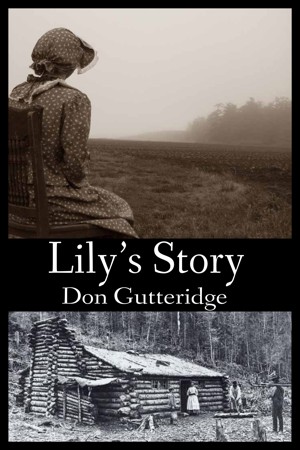 This engrossing historical drama comes from the acclaimed author of "The Rebellion Mysteries" starring Marc Edwards.

Plenty of novels have been written about frontier days and frontier gals, but Lily’s Story is different: it doesn’t just tell her story, it immerses readers in the sights, sounds and sentiments of her times . . . There’s a big difference between a novel that describes events and one that plunges the reader into its setting and world. Gutteridge holds the ability to bring this strange frontier world to life as readers absorb Lily’s interests, fascination with the unknown, and reactions to how her parents settled the land. These feelings are precisely captured in succinct, hard-hitting descriptions, filled with insights about the moments and seconds of Lily’s experiences of her world . . . Gutteridge’s ability to keep Lily’s character vivid and her experiences as fast-paced as the romance and cultural and technological changes that drive her world, makes for exquisite reading . . . A solid historical novel will impart this sense along with the facts that depict bygone times. Lily’s long life and many experiences take her from frontier times to the birth of a new village, and a new world. That she carries readers along for a heady ride through politics, sleigh rides, train rides and the advent of World War I makes for a compelling read, hard to put down and especially recommended for readers who want more than a ‘show and tell’, but a vivid saga that brings a woman’s many years and transitions to life against the backdrop of astounding changes.

(reviewed 4 years after purchase)
Don Gutteridge reviewed on July 3, 2015
(no rating)
Review of Lily’s Story by Colm O’Sullivan, Professor Emeritus, Western University
What I am attempting to do here is not write a standard book review but to give you some of the personal and no doubt idiosyncratic responses of an appreciative reader’s re-reading of Lily’s Story. I can readily see why the author considers this book his magnum opus; Through the writing here, the village of Point Edward, Lambton County, Ontario, has found a voice to express its unique identity and the stamp it has placed on its people, as surely, if not as widely, as Shropshire and Wessex and the Mississippi River and Yoknapatawpha County have found their voices. This then is primarily a novel of place; the sense of place is palpable; the events arise uniquely from the character of the place and its times and simply could not have arisen from any other source, and what drives people such as yourself to write. Though the ordinary people of Point Edward gain no scrap of immediate material profit from Gutteridge’s writing of them, it raises those ordinary lives to epic stature, and gives them in Horace’s phrase ‘a monument more lasting than bronze.’
The period the story encompasses, three fourths of a century or so, is of course the seminal stage in the birth and growth of Point Edward and its adjacent territories, the metamorphosis from semi-settled, semi-nomadic frontier life to more or less civilized, grounded living. Existence for these pioneers was harsh, with much drudgery and physical hardships and entirely lacking the social schemes we take for granted to cushion the blows life throws at us. Although some traces of pageantry and grandeur come their way at irregular intervals to remind them of the great imperial enterprise of which they are a peripheral part, there are few joys or pleasures in their lives other than the most basic ones, and there is much pain, especially the pain of loss of loved ones. What appears to sustain them is an indomitable spirit allied to a strong sense of wit and irony. Lily is thus their ideal representative in that she has no sense of entitlement or even expectation of fair play, but is the ultimate Stoic and entirely admirable. As a minor actor, indeed in a frequently menial role, in the heroic enterprise of taming the wildness and creating civilization, she expects no recognition, seeks no plaudits and accepts losses and disappointments with courage, resourcefulness and even equanimity. And these are the qualities the task at hand requires. In her practical philosophic stance there is no room for fear of the vagaries of the future or even of death. This is the courage that sustains her even as some of her neighbours forget that she ever had a past or a name or a life other than Granny Coote; her sense of self is still strong. And her story is well worth the telling; even for this reader, whose forebears never stood on the soil of the New World, Lily’s story is part of my cultural heritage, a racial memory I can claim as my own.
Lily’s Story is for me then above all a novel of place; it is in part a recognition of the place to which I immigrated. In my early years in teacher education when my school visits were mostly to rural elementary schools, I developed a habit especially in the springtime of the year of poking about in old cemeteries and peering at the inscriptions on the most eroded tombstones. What I was doing, though I didn’t realize it at the time, was looking for hints of Lily’s story, of the sights and sounds and smells of the world she and her contemporaries inhabited. The novel has brought much of that to life for me, not just the ambience of her daily life but also the set vignettes of occasions in places we know only in their twenty first century incarnations:-- Lily’s brief sojourn in London during her pregnancy; the frenzy during the oil boom in Petrolia and Oil Springs; the Underground Railroad and the threat of US slave-recovery laws; the chicanery of the railway companies; Sir John A. quietly vomiting into the bushes at the hustings. And then there is the poet’s instinct for the exactly right phrase, “the rite words in the rote order” as Joyce called it, as in: “From the left side of the platform, Mr. Mackenzie skewered him with his Presbyterian eye.” And then there are the vivid recreations of nature, winter storms, torrid days, polar nights, dogs and deer and flowers and forests and gardens. Gutteridge has given us a cornucopia.

Lily’s Story follows the life of a pioneer woman from childhood to dotage. Born on a rough hewn farm in Southwest Ontario in 1840, she witnesses over her long life the end of the old-growth forest, the disappearance of the natives, escaped slaves arriving on the Underground Railroad, the coming of steam trains, the discovery of oil, the birth of Canada, economic prosperity and depression, and several wars that claim men in her family.

Gutteridge has blended superbly researched history with lyrical literary fiction to create an intriguing tale of the sorrows, sacrifices and joys of Lily’s entangled life. Lily’s Story is part history and part fable, with historical personages and a bizarre gallery of local characters. It is one of the few historical fiction books that includes a bibliography—just so you know the history part is not made up. It is a long book at 287,950 words and not designed for anyone with a short attention span. It is a long read and worth every minute.

You have subscribed to alerts for Don Gutteridge.

You have been added to Don Gutteridge's favorite list.

You can also sign-up to receive email notifications whenever Don Gutteridge releases a new book.