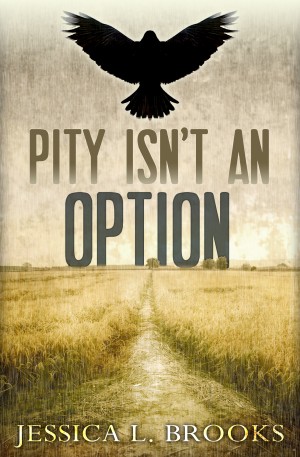 By Jessica L. Brooks
Rated 4.00/5 based on 2 reviews
Seventeen year-old Jonas' blood disorder has taken away everything that matters. Sixteen year-old Hattie's father has gone and lost his marbles. But when Jonas' perfectly healthy twin brother and Hattie's crazy dad are drafted into the President's army, Hattie's dad disappears. Jonas and Hattie embark on a journey to find him, and find something they'd lost long ago in the process. More
Seventeen year-old Jonas Norton is trying to come to terms with what his blood disorder has robbed from him, including his two most favorite things: basketball, and competing in Hatchet Racket, Wanless’ annual hatchet-throwing contest. The facts that his father works constantly to pay for his blood tests and Jonas can actually see the disappointment in his eyes for being such a failure only make matters worse. And even worse than all of that? Jonas' own twin brother, Micah, is perfectly healthy and becoming quite the basketball player himself. Also, Hattie, the girl Jonas has loved for forever? She has no idea how he feels.

Sixteen year-old Hattie Akerman lives down the hill from Jonas. Though her father, Heath, tries to hide his lack of mental clarity behind the bottle and she's pretty much given up on having any kind of relationship with him, she would still rather her younger sister, Lucy, not have to deal with the consequences of his behavior. Hattie helps her mother by baking food to sell at Market and looking out for Lucy. No matter what the rest of the town says about her crazy father, Jonas sticks up for them. He is, by far, her very best friend.

As if things aren’t complicated enough already, Heath and Micah are unexpectedly drafted into President Kendrick's army (an army from which no one ever returns) just days before Thanksgiving. When Heath disappears instead of arriving at the Meeting Place to check in, Hattie and Jonas decide they’ve had enough, and take matters into their own hands. And though nothing could have prepared them for what happens next, Hattie and Jonas learn that hope can be seen in every situation. You just have to know where to look.

Jessica L. Brooks is a lover of books, coffee, and all things owl-dorable. She writes young adult books about near-future dystopia (Pity Isn't An Option, Cozenage #1, available now) and magical realism (the Flora series, If I Speak True, Flora #1 & By Sun and Candlelight, Flora #1.5 available now), and loves to serve virtual cookies.

Connect with Jessica on her blog, Let Me Tell You A Story, Tumblr, or anywhere else on the interwebs by doing a search for her username: coffeelvnmom.

One of the things I liked the most about this book were the main characters! They were beautifully written, they sounded real and were very likeable! The secondary characters were also very unique and they all had distinguishable traits and interesting back stories.

I also think that the world was very believable and so was the way people reacted to the government.

In my opinion the story moves really slow and only in the last quarter of the book something really exciting happens! The rest of the book shows more the daily life of the people and their struggles (especially the main characters) so when Heath disappears after he was drafted, Jonas and Hattie come up with a plan that was quite entertaining and I found myself rooting for them to be successful!

The ending isn't very happy but even though it is a bit of an open ending it leaves you with a sense of closure. I would still love to read a sequel and perhaps get to know the characters even more.

All in all, I think this is a great contribution to the dystopian genre. The world and the characters are very well thought out but the pace can be extremely slow in the beginning.

Pity isn't an option when you're trying to survive

In her YA debut, Jessica Brooks has written a novel in a realistic dystopian setting that captivates and explores how people live on when faced with difficult situations.

I deserve to be treated like a human. I'm still a person who wants to do things and has dreams and potential and believes that carrying out what you want to do in life can be possible.
That is it.


Jonas is a boy with a rare blood disease that is struggling to be normal and doesn't want to be seen for the condition that he has but for what he is. Hattie is a girl who is coping with a life filled with a bleak future, looking out for her younger sister Lucy and trying to make things work at home. The two have been friends for as long as they could remember - but a)will it develop into something more? and b)how will their bond cope when faced with a challenge neither of them expected?

Sometimes it's not what you see that is important. It's what you feel


I loved how the author incorporated such meaningful quotes throughout the novel that gave the characters depth and the capacity to resonate with the audience. The fact that the book was written with alternating points of view from both Jonas' and Hattie's also made it interesting to see their different perspectives on how they felt about each other and the fact that their lives were getting to much more unstable. Although there wasn't a great deal of world-building and what was given was quite vague, the character development certainly made up for this slight flaw. This novel had something that some dystopian novels lack: FEELING - and that counts for a lot in my eyes. The ending was a cliffhanger for sure and makes you realize the lengths some people will go to in order for them to protect those they care for.

*CONCLUSION*
In all, this was a pretty impressive novel that I would definitely recommend to readers who have a taste for dystopian-esque plots that have depth and character. I am definitely hoping for the sequel to this one - as Jessica Brooks has definitely left us hanging!

You have subscribed to alerts for Jessica L. Brooks.

You have been added to Jessica L. Brooks's favorite list.

You can also sign-up to receive email notifications whenever Jessica L. Brooks releases a new book.