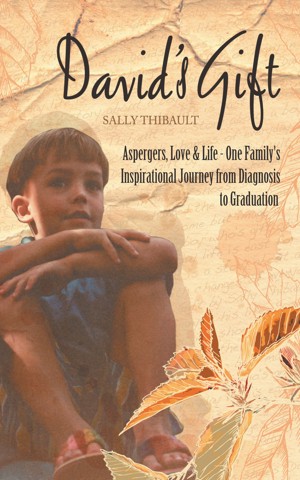 By Sally Thibault
“Sometimes life hands you a challenge that at the outset seems insurmountable, but later you realise it was in fact a gift that changed your life.” When author and speaker Sally Thibault’s son David was diagnosed with Asperger’s Syndrome, it was the beginning of a long struggle. David’s Gift takes you through Sally’s family’s journey from diagnosis to graduation - with a degree. More
David’s Gift is a special book about a special boy and his extraordinary parents, who move from wishing to make their son “normal” to recognising his unique difference and personality. It’s a love story about a son and a family and a very special mother that helped David take his first steps towards a less fearful, more connected life. This book shows that the journey out of any fractured human situation is always through growth that comes from love, understanding, compassion and forgiveness.

In 1979 Sally commenced her career as a Fitness instructor in Canada, a career she enjoyed for over 15 years. During that time she developed Aerobic Instructor Training courses, training over 400 aerobics instructors; hosted Canada’s first Cable TV fitness show; and facilitated the world’s largest indoor aerobic class 2,000 participants (Edmonton Canada 1982).

After returning to Australia with her husband, Sally developed seminars and keynote presentations on The Art of Losing Weight Permanently and Surviving Stress.

In 1997 her 12 year old son David was diagnosed with Asperger’s Syndrome. The subsequent challenges and difficulties required a change in direction for her, and for the family.

In 2000, she commenced a new career as the Director of Community Relations for a Queensland Independent school, a position she held for ten years. During that time, she served as the Vice President of ADAPE Queensland (Association of Development Professionals in Education) from 2004 till 2008 and presented at three ADAPE International Conferences on the topics of Educational Marketing.

In April 2010 she released her first book; David’s Gift, the inspirational true story about how she changed from wishing to make her son ‘normal’, to recognising his unique difference and personality and in doing so enabled him to take his first steps towards a less fearful, more connected life. In 2010 David graduated from university with a Bachelor of Film and Television and now works as a Video Editor. He has travelled widely and currently in a wonderful relationship with his soul mate. The story offers hope, inspiration and insight into how overcome the challenges of autism to those living with the diagnosis.

Not long after the launch of David's Gift and following an emotional argument with her then 16 year old daughter, she knew something had changed dramatically for teenagers. Sensing that social media and technology may have something to do with how teenagers now perceived life (and their parents) she began an 18 month quest to research to see if in fact there was a connection. Wise Mothers, The Parable, Raising Children in the Social Media Era was the result.

Sally holds a Diploma of Professional Counselling, is a fellow of the Association of Development Professionals in Education, and member of the Board of Trustees of The Goda Foundation; an educational foundation offering global education and leadership experiences for students.

You have subscribed to alerts for Sally Thibault.

You have been added to Sally Thibault's favorite list.

You can also sign-up to receive email notifications whenever Sally Thibault releases a new book.