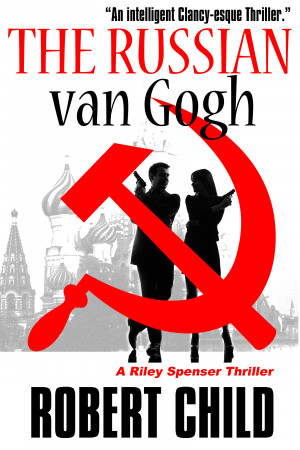 By Robert Child
A Russian government warehouse is breached and a Chechen terrorist now possesses a priceless van Gogh the world thought lost in an allied bombing raid in 1945.

The masterpiece seized by the Red Army in the last hours of WWII is part of a hidden stash of billions of dollars worth of art. The Monuments Men enlist MI6 to find the painting before its too late. A gripping intelligent page turner. More
A secure Russian government warehouse is breached in a violent raid. Chechen terrorist Sergey Karpov now possesses a priceless van Gogh the world thought lost in an allied bombing raid in 1945.

Seized in a German museum outside Berlin by the Red Army Trophy Brigade during the last chaotic hours of WWII the masterpiece is part of a hidden stash of billions of dollars worth of stolen art the Russians want kept secret.

Karpov’s plans to extort the Putin administration are met with an iron fist and he turns to the world stage releasing a shocking tape to the BBC declaring he will burn the van Gogh and other paintings if his ransom is not paid in seven days.

The Russian van Gogh is a thrilling international race against time as the van Gogh Museum in Amsterdam posts a $10 Million dollar reward for the captured painting’s return. And British Secret Service along with WWII stolen art recovery experts, The Monuments Men, all join the hunt.

The Monuments Men, founded at Harvard University, dispatches Art History Professor and Forensic Art Detective Riley Spenser, the world’s leading expert on the paintings of van Gogh to authenticate the painting. If it is truly the lost van Gogh from WWII it’s value could reach $300 million. Riley teams with British MI6 Agent, Justin Watson, and together speed to Moscow and eventually to the most dangerous city in Russia to find the painting.

From first page to last the story is a gripping intelligent page-turner filled with intrigue and peppered with cinematic action that jumps off the page like a major motion picture.

"If you want to see a great movie read a book by Robert Child." N. Marcus, Literary Review.

Stay up with new releases. Join Rob's newsletter at www.robchild.net

Award winning author, Robert Child, is a master of action, pacing and cinematic storytelling in his visually gritty thrillers. Military history is one of his passions and runs through his veins. His Great-grandfather, Thomas W. Child, was cited for courage by his commander, Joseph Hayes, at the Battle of Fredericksburg fighting for the Union in 1862. Sergeant Child charged the stonewall not once but twice with the 18th Massachusetts and survived to fight on Little Round Top at Gettysburg.

Not to be outdone Rob's 4th Great-grandfather, Jonas Child, fought for American Independence at the first bloody engagement of the American Revolution at Lexington and Concord on April 19, 1775. Jonas went on to fight beside Gen. George Washington at the Battle of Dorchester Heights and served till the end of the war in 1781.

Rob possesses that rare ability to transport readers almost instantly into gripping, intelligent page-turning narratives that feature well developed characters and cinematic action that jumps off the page like a major motion picture.

He has won more than 25 awards for writing and aside from his regularly published independent works he is currently authoring a new WWII novel with coauthor, Denise George, which will be published by Random House / Penguin in the fall of 2016.

Join his newsletter and keep up to date with all his new releases at www.robchild.net

You have subscribed to alerts for Robert Child.

You have been added to Robert Child's favorite list.

You can also sign-up to receive email notifications whenever Robert Child releases a new book.