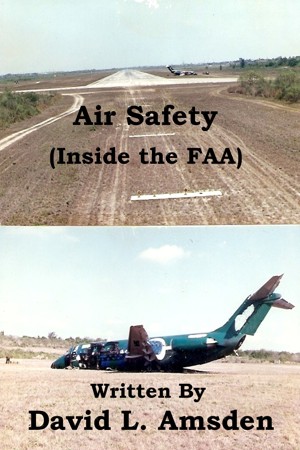 Air Safety (Inside the FAA)

By David Amsden
“Air Safety (Inside the FAA)” is a Nonfiction about my aviation experiences, including true stories, and exposes several serious aviation safety concerns I discovered as an Aviation Safety Inspector and could not get the FAA to address, Discover many problems within the FAA’s Aviation Safety System. More
Air Safety (Inside the FAA) is written for anyone involved in aviation or who uses the air transportation system for travel. I disclose my extensive background in aviation to establish my qualifications for giving my opinions regarding many facets of the aviation industry, including regulatory oversight by the Federal Aviation Administration (FAA). I also include true experiences concerning my personal aviation maintenance and pilot endeavors, which have provided me with additional experience. I share stories of aviation accidents and incidents to show how the FAA’s Aviation Safety Inspectors perform their duties and make safety recommendation.

A couple of chapters deal with in-depth problems of existing regulations, including what I believe to be improper violations of aircraft mechanics working for airlines, the operation of unairworthy aircraft in revenue service, and the inadequate and useless program the FAA uses to perform it’s so called surveillance known as the Air Transportation Oversight System or ATOS for short.

In the process I hope to expose the contempt and abuse of FAA management that I feel undermines the trust given them by the public. I feel the only reason any safety in aviation exists today is because of the integrity of the FAA inspectors that go above and beyond the call of duty to keep the public safe in spite of management and all of the ridiculous FAA policies and procedures and bad interpretations of the regulations. I must not forget all the great mechanics, pilots, flight attendants, and support people in the airline industry that also have the integrity to do their best to make aviation safe for the public under the broken system in which they are forced to work.

I grew up in North Palm Beach, Florida where I was fortunate to enjoy surfing, boating, fishing, scuba diving, riding motorcycles, and racing cars at Palm Beach International Raceway. In 1968 I traveled with Cast C of the Up With People musical group, including a three months tour performing all over Italy. After returning to Florida I joined the United States Air Force as an aircraft mechanic, beginning a long career in aviation. During my active duty I spent some time in 1969 and 1970 in Vietnam and later was assigned to the 53rd Weather Reconnaissance Squadron’s Hurricane Hunters for two years in Puerto Rico. A few years after leaving active duty I joined the Air Force Reserves in 1977 as a C-130 Flight Engineer for three years. Then from 1980 to 1989 I managed maintenance bases for several freight airlines on large turbo prop and jet aircraft in Missouri, Utah, Arizona, and Texas until I was finally hired as an Aviation Safety Inspector with the Federal Aviation Administration at DFW Airport, Texas, until retirement in January of 2010. I currently live in Spring Hill, Florida and enjoy Caribbean cruises and scuba diving. My travels brought me to places in about 25 different countries and through parts of all 50 states, of which I lived for a time in 5 of them. I resided the longest in the Dallas/Fort Worth area of Texas and I can say I truly miss Texas, but I don’t miss the tornadoes.

You have subscribed to alerts for David Amsden.

You have been added to David Amsden's favorite list.

You can also sign-up to receive email notifications whenever David Amsden releases a new book.