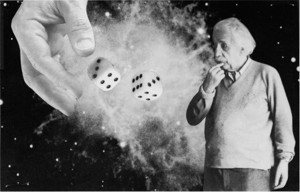 Yet, if scientists have learned anything over the past century it is that the universe is anything but rational. Though Einstein refused to accept this unsettling truth, quantum physicists have demonstrated time and time again that it is impossible to specify the exact properties of even a single quantum particle.

So where does this leave us? As scientists have expanded the frontiers of knowledge, they have gradually come to realize that the universe is chock full of mysteries that may forever elude even the cleverest of truth-seekers. Thus, real geniuses are not the people who think they have all the answers--such as Pierre-Simon Laplace, Albert Einstein, and Stephen Hawking. Instead, true geniuses are the people who figure out how to ask the right questions.

Scientists do their best work when they humbly own up to to their own ignorance. Science is an enterprise that succeeds in revealing new truths by taking one plodding step forward—or, as Richard Feynman suggests, by peeling back one layer of a cosmic onion—at a time.

Finally, a word to the wise: if there is a god, then, contrary to what Einstein believed, he does play dice with the universe. Scientists who don't want to crap out would be well advised to wise up to the rules of his endlessly surprising game.

2015 - Awarded a Fulbright Scholarship to teach and conduct research at Mahidol University in Bangkok, Thailand.

2013-2018 - Elected to the roster of Fulbright Specialists by the Council for the International Exchange of Scholars in Washington, DC.

2009 - Summer Scholar at the East-West Center at the University of Hawaii in Honolulu, Hawaii.

2006-2007 - Interim Director of the Center for Teaching Excellence at the University of the Pacific in Stockton, California.

2002-2003 - Awarded a Fulbright Scholarship at the Centre for Social Studies in Warsaw, Poland.

Prof Tim's most recent books include:

In progress, Verboten! Free Speech and Thoughtcrime in the 21st Century

2013, Evolution at the Speed of Thought: A New Chapter in the History of Evolution. WheelMan Press. Los Angeles, CA.

2011, Good Science: The Search for Truth and the Evolution of Reality. Lexington Books. Lanham, MD.

You have subscribed to alerts for Timothy McGettigan.

You have been added to Timothy McGettigan's favorite list.

You can also sign-up to receive email notifications whenever Timothy McGettigan releases a new book.