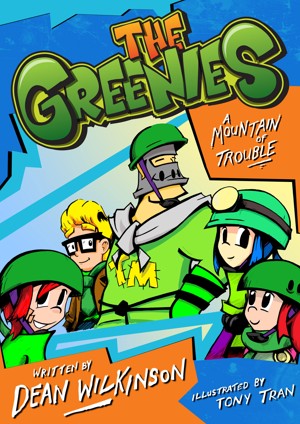 The Greenies Book 1: A Mountain Of Trouble!

By Dean Wilkinson
A collaboration between Dean Wilkinson (Little Big Planet) and Engaging Education. The Greenies is a comedy series encouraging recycling with good vs evil battle!

Dean Wilkinson is a television scriptwriter, novelist and games writer. He was Ant and Dec’s writer for 7 years penning the multi award winning SMTV Live & Chums.
He penned 2 series of his own CBBC sitcom Bad Penny starring Graham Fellows (aka comedian John Shuttleworth), as well as 2 series of his sketch show Stupid starring Marcus Brigstock and Phil Cornwell.
As a games writer he has written for the entire LittleBigPlanet series, Fantasia : Music Evolved, Driver San Francisco and Worms, amongst many many others.
His long writing career has seen him scribbling for Stephen Fry, Hugh Laurie, John Cleese, Smith & Jones, Matt Berry, Brian Conley, Noel Edmonds, Chris Barry, Zig & Zag, The Krankies, Simon Pegg and Harry Hill to name drop but a few.
Dean is father to three daughters, Emily, Alice and Grace.
www.deanwilkinson.net

You have subscribed to alerts for Dean Wilkinson.

You have been added to Dean Wilkinson's favorite list.

You can also sign-up to receive email notifications whenever Dean Wilkinson releases a new book.