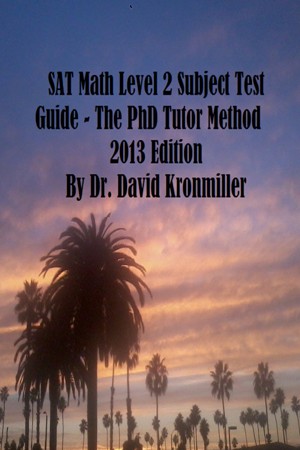 By Dr. David Kronmiller
This book is a guide on how to score an 800 on the SAT Math Level 2 Subject Test. It introduces the student to the PhD Tutor Method developed by Dr. Kronmiller. This approach instills confidence that the student will be able to complete the exam with time to review and then provides skill set improvement. More
Over the last fifteen years, I have been tutoring high school and college students in an effort to encourage young men and women to enter the fields of science and mathematics. As a nation we are no longer number one in technology. Technology drives our economy. New technology leads to new products to sell and increase the gross national product.
I have developed a method that I call The PhD Tutor Method. It instills the student with confidence that they will be able to complete the exam with time to review their answers. This removes the stress and students make fewer, "In a hurry mistakes." With this stress removed they are able to complete the exam and score the highest possible score based on their skill set.
Once the timing control method is understood, the book turns to skill set strengthening. Included in the book are sixty problems and solution sets.
I just saw my most recent student off at the airport. He was on his way to an interview for an accelerated undergraduate and medical school program. He scored an 800 on the SAT Math Level 2 Subject Test and a 36 on his ACT.
My students last year were admitted to Columbia, MIT, Princeton, Cal, UCLA and USC. They all benefited from the PhD Tutor Method.

Dr. Kronmiller holds an earned PhD. in Physics from the University of Texas at Dallas where he was a Robert Welch Fellow in Chemistry. He earned a B.S. in Natural Sciences, in the major areas of astronomy, math, physics and chemistry, from the University of Cincinnati. He is the inventor on multiple patents and author of peer review publications in electronics, physics, and chemistry. He is a member of the American Physical Society, Sigma Pi Sigma - National Physics Honor Society, American Chemical Society and the IEEE. In his early twenties, he worked for P&G and developed Downey fabric softener and optical brighteners for Tide. In his thirties, Dr. Kronmiller served as part of a medical missionary team in the Amazon Jungle of Brazil. Most recently using a method of laser chemistry, Dr. Kronmiller developed an asymmetric separation membrane used for water purification for long duration space flight. He has been teaching for over 40 years.. 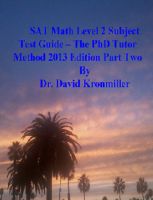 You have subscribed to alerts for Dr. David Kronmiller.

You have been added to Dr. David Kronmiller's favorite list.

You can also sign-up to receive email notifications whenever Dr. David Kronmiller releases a new book.