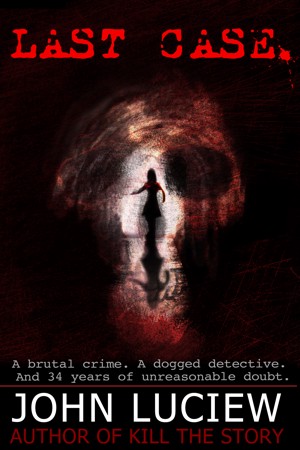 By John Luciew
It's 1978 and horror director George A. Romero is about to shoot his zombie classic "Dawn of the Dead" near Pittsburgh, Pa. Then on Halloween night, a 12-year-old girl dressed as Olivia Newton-John's character from "Grease" is slashed to death in a brutal, bloody crime. The film and the case soon converge on a collision course that could thwart both, if not for the deeply buried truth. More
DON'T MISS JOHN LUCIEW'S ALL-NEW, FULL-LENGTH MYSTERY!

A brutal crime. A dogged detective. And 34 years of unreasonable doubt.

It's 1978 and acclaimed horror director George A. Romero is gearing up to shoot his zombie cult classic "Dawn of the Dead" in the Monroeville Mall, just outside Pittsburgh, Pennsylvania.

On Halloween night, a 12-year-old girl dressed as Olivia Newton-John's character from "Grease" is slashed to death in a brutal, bloody crime. Her mutilated, blood-soaked corpse is found on the back patio of her broken, unhappy steelworker's home on the outskirts of the city. But as imperfect as they both are, the girl's estranged, unfit parents seem incapable of this level of violence.

Forced to work together, the two warring detectives follow a convoluted trail of evidence to a special-effects guru working on the "Dawn of the Dead" production. Did this make-up man's obsession with death, dismemberment and bloody violence veer from make-believe into murder?

A key piece of evidence tied to the celebrated zombie movie set seems to clinch the case.

But Mulcahy isn't so sure. And the uncertainly nags at him for the next 34 years. Until the celebrated veteran detective, now in the late stages of colon cancer, decides to revisit the case one last time.

The debilitated detective is joined by a young-but-retired protégé in the department who lost a limb while a reservist in the Iraq war. Along with Mulcahy' beautiful, computer-crafty hospice nurse, they pursue the real killer in hopes of unraveling more than three decades of mystery. All before Mulcahy takes the final secrets to his own grave.

Told in chapters that alternative between past and present, this engrossing, two-track mystery will leave you guessing until the very last page.

It's a heart-stopping battle against the criminal justice bureaucracy, a stone-cold killer's unmerciful evil -- and mortality itself. You won't be able to stop reading until Mulcahy discovers the final shocking twist hidden at the heart of his toughest case.

It was his first case. Now, it will be his last.

The only question is, can Mulcahy uncover the truth in time?

BREAKING NEWS!! All five of my full-length mystery/thrillers are coming soon in unabridged audio form. ZERO TOLERANCE and KILL THE STORY are already out for 2013 from Audible.com. SECRETS OF THE DEAD is up for full sound-recording treatment next, followed by FATAL DEAD LINES and my newest mystery, LAST CASE. I hope you will check them out. Some serious voice talent has been brought to bear to turn my best ripped-from-the-headlines page-turners into a can't-stop-listening, white-knuckle audio mystery experiences. Now, a little more about me and my books:

If Hollywood was ever going to make a movie of one of my books, KILL THE STORY would be the one. It has everything -- a high concept, a deepening mystery rooted in actual events and more off-beat but convincingly real characters than you can count. This is journalism as I saw it -- both from the outside looking in and the inside out. It says nearly everything I have to say about the state of media today -- all without slowing the non-stop action one little bit. I hope you enjoy reading it as much as I loved writing it.

Lenny Holcomb, my first literary character, spoke to me in much the same way the dead people of his obituaries speak to him. But after my first book, FATAL DEAD LINES, I found out Lenny and the dead people from his obits had more to say. Much more.

SECRETS OF THE DEAD, a specially updated sequel, completes Lenny Holcomb's intriguing saga, finally presenting his incredible story in full. I hope you enjoy it, discovering the many narrative arcs that bridge both books and come to a full and satisfying resolution by the final page.

ZERO TOLERANCE Is probably my most unique and unconventional book -- a thriller set in the cloaked, cloistered world of juvenile justice. Namely, a youth reform camp set in the outskirts of Pittsburgh, Pa. It also stands as my most researched novel to date. As a journalist, I spent years covering the Pennsylvania juvenile justice system at a time when the penalties and punishments for young offenders were being ratcheted up. All that authenticity is here -- along with a highly original plot that will have you guessing until the very last page.

LAST CASE, my newest thriller, is set in 1978, just as acclaimed horror director George A. Romero is gearing up to shoot his zombie cult classic "Dawn of the Dead" in the Monroeville Mall, just outside Pittsburgh, Pennsylvania. I was a bit too young back in 1978 to offer my able body as one of Romero's delightfully desiccated corpses in "Dawn of the Dead." But I will never, ever forget watching the Monroeville Mall - a place where I shopped for school clothes and cruised for girls - turned into a splatter-filled shopping fest for the undead.

I guess you could say it's haunted me all these years.

You have subscribed to alerts for John Luciew.

You have been added to John Luciew's favorite list.

You can also sign-up to receive email notifications whenever John Luciew releases a new book.