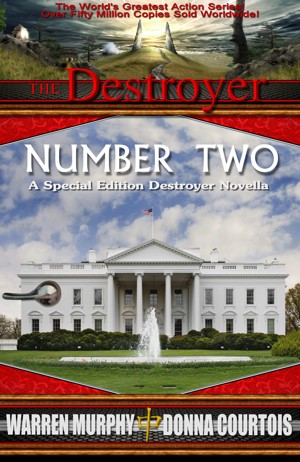 There is no love lost between this administration and CURE, the secret government agency created decades ago to protect the United States. Recent events in the White House have caused Harold Smith, CURE’s director, to sever the ever-present hotline between himself and the President. But patriotic duty calls: Smith must keep the Vice President safe. Remo and Chiun are summoned to protect the Vice President and flush out the villains. Can they eliminate the bad guys before the Vice President takes a hit? The race is on…

About the series:
Sentenced to death for a crime he didn't commit, ex-cop Remo Williams is rescued from the electric chair and recruited by a secret government organization as an assassin, targeting criminals who are beyond the law. Remo's trainer is a grouchy, ancient Korean named Chiun, whose mastery of the ancient martial art of Sinanju makes him the single most lethal force on the planet.

Hilariously satirical and timely, the winning combination of action, humor, and mysticism has made the Destroyer one of the best-selling series of all time. With more than 150 books and over 50 million copies sold, the Destroyer has been praised by the LA Times as "flights of hilarious satire," and gave birth to the mythology of the brash westerner taught by an ancient, inscrutable master.

Warren Murphy's first jobs in life were working on a pig farm, then as a movie usher, a sequin polisher, a public relations man for a brothel, a newspaper editor and a Democratic politician in Jersey City, New Jersey. "And then I went bad," he says, "and became a novelist."

That was back in the last century, and after some 200 books and several threatened retirements later, he is still at it. Now he is moving full-bore into the world of electronic publishing. Murphy has collaborated with his sons in forming his own publishing company, Destroyer Books.

Murphy is probably best known for the Destroyer series, which he created with the late Dick Sapir. With over 150 books and worldwide sales of over 50 million copies, the series is one of the longest-running and bestselling series of all time. The books were made into a movie, "Remo Williams: The Adventure Begins" (a second movie is threatened to be in the works), a TV pilot, as well as more film and TV rip-offs than anyone could ever imagine.

Called "a mentor and teacher to a whole generation of crime and thriller writers" by Encyclopedia Mysteriosa, Murphy is no one-trick pony. The St. James Guide to Mystery Writers states that "The breadth of Murphy's talent staggers the imagination. Comic detectives, caper novels, large suspense novels, sword and sorcery spy novels, and locked room mysteries, together with short stories, comic books, movies, and countless collaborations do not even begin to mark the parameters of his creative genius...Murphy is the professional's professional, with work of consistently high quality."

Some of the other work on Murphy's resume would include:
- The Trace series
- The Digger series
- The Razoni and Jackson series

Not to mention Leonardo's Law, Ceiling of Hell, Grandmaster, The Forever King (those last two written with Molly Cochran), along with dozens of other works.

Murphy now lives in Virginia, and says he can be found at his desk or on the golf course. He has five children. Most of them, he says, "wash up pretty well."

His website is http://www.warrenmurphy.com, where he is currently writing a blog on how to write a book.

You have subscribed to alerts for Warren Murphy.

You have been added to Warren Murphy's favorite list.

You can also sign-up to receive email notifications whenever Warren Murphy releases a new book.