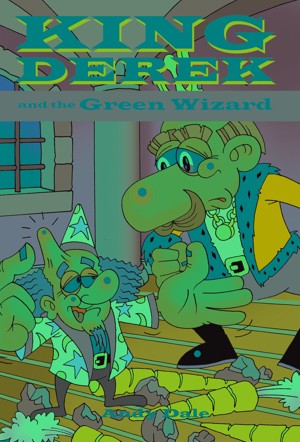 King Derek and the Green Wizard

By Andy Dale
King Derek, the King of Dudley, has a lovely wife, Queen Queenie, but he just wishes she didn't sing so badly. Nobody has ever heard anything quite like the singing Queen Queenie.

Finally, 25 years after I started writing it, I am published my début novel 'First Years - Piranhas in the Bedroom'. It started in a time long before Google, Sky TV, iphones and X-Factor . Now it ends up being an E-book as well.

For the last six years I have been writing weekly humorous blogs based on SharePoint, but I really always wanted to be, in the words of the Beatles, a 'Paperback Writer'.

So finally I released my first fictional romantic comedy, 'First Years - Piranhas in the Bedroom'. Hopefully the first of a series of nostalgic books about an unfortunate young man called Jonathan Stadler, a Villa fan like me.

Now Jonathan Stadler is going back to 1981 for the ultimate Aston Villa experience in 'Just 14'. My second book released July 2015.

The books hope to appeal to the sense of humour of the male reader in his 40's. At some point in our lives we have all found ourselves in the kind of situations that Jon does. My influences have been two terrific authors in Mike Gayle and Nick Hornby.

Now to continue with my mid-life crisis by releasing a series of children books ... Is the world ready for 'King Derek and the Wonder Wizards'?

You have subscribed to alerts for Andy Dale.

You have been added to Andy Dale's favorite list.

You can also sign-up to receive email notifications whenever Andy Dale releases a new book.